Reaction to the Emancipation Proclamation 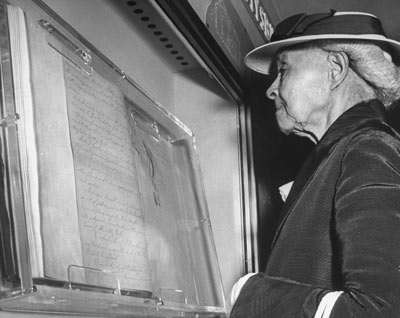 An ex-slave reads the Emancipation Proclamation in 1947.
Francis Miller//Time Life Pictures/Getty Images
"And, by virtue of the power and for the purpose aforesaid, I do order and declare that all persons held as slaves within said designated states and parts of states are, and henceforward shall be, free; and that the executive government of the United States, including the military and naval authorities thereof, will recognize and maintain the freedom of said persons.

And I hereby enjoin upon the people so declared to be free to abstain from all violence, unless in necessary self-defense; and I recommend to them that, in all cases when allowed, they labor faithfully for reasonable wages."

The first parag­raph has the strongest wording in the entire document: Lincoln's earlier drafts had abolished slavery in the future tense. As author Allen C. Guelzo points out, "In the final draft, the time had come to make the prospect a present reality" [source: Guelzo]. It was this wording that triggered celebrations in many Northern cities on Jan. 1, 1863 -- slaves weren't going to be free someday, they were free. But while abolitionist and freed blacks celebrated that idea, others worried. Some white Northerners thought masses of freed slaves would invade the North and take all of the jobs; others feared violent uprisings as slaves killed former masters and overran the South.

In response to these concerns, Lincoln added the second paragraph. It was mostly unnecessary. Some slaves did threaten and kill former masters, but it was rare. On some plantations, slaves numbered in the hundreds and simply overtook the plantation and ran off the owners.

Most slaves learned of the proclamation through the grapevine, others as the Union Army passed through. Rather than rising up against their former masters, many of the freed slaves attempted to join the Army. Others headed to the cities -- as far away from the plantations as they could get -- to reconnect with family.

­There were some slaves who didn't learn of their freedom immediately. For instance, those in Key West, Fla., had heard about the Emancipation Proclamation, but didn't learn that it had gone into effect until mid-January 1863. And news of the Emancipation Proclamation didn't reach parts of Texas until as late as June 1865 -- after Lee had surrendered.

However, most slave owners' attempts couldn't keep the news of the Emancipation Proclamation from their slaves. And, despite the document's shortcomings, "No slave declared free by the Proclamation was ever returned to slavery once he or she had made it to the safety of Union-held territory" [source: Guelzo].

­Originally, Jan. 1 was celebrated as "Freedom Day," in commemoration of the date the Emancipation Proclamation went into effect. The custom died out in the early 20th century. But news of the Emancipation Proclamation didn't reach Texas until June 19, 1865, when Union soldiers arrived in Galveston. The local celebrations evolved into a national remembrance of the day slavery was eradicated