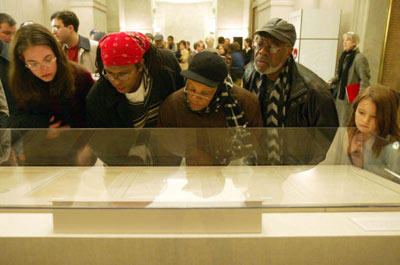 Visitors view the original Emancipation Proclamation during a one-day-only exhibit on Jan. 19, 2003, at the National Archives in Washington, D.C.
Alex Wong/Getty Images
"And I ­further declare and make known that such persons of suitable condition will be received into the armed service of the United States to garrison forts, positions, stations, and other places, and to man vessels of all sorts in said service."

In this paragraph, Lincoln officially allowed freed slaves to be accepted into the armed services. This had a huge effect on the war. Any racist sentiments about whites fighting for blacks' freedom were mostly squelched when freed slaves joined the Army in large numbers. However, many freed men (and women) who crossed over to Union lines ended up in contraband camps, which mostly involved them doing drudge work while suffering from malnutrition and exposure. The conditions were so horrible, the deaths that resulted from these camps accounted for most of the South's civilian casualties [source: McPherson].

The freed slaves who were accepted into the Army proved to be as effective soldiers as whites. One of the most famous of the black regiments, the 54th Massachusetts, was the subject of the movie "Glory," the white troops, and public opinion grudgingly followed.

In Vicksburg, Miss., wealthy plantation owners fled -- with their slaves in tow. Many other slaves escaped to Union lines. As a result, there was less slave labor to work on Vicksburg's fortifications. General Ulysses S. Grant, himself a former slave owner, was eventually able to break the defenses at Vicksburg, and he credited the freed men for much of his success. Vicksburg was a major Union victory because it gave the Union control of the Mississippi River.

Additionally, the Emancipation Proclamation ended the secret support that European countries like England and France had been giving to the Confederacy early in the war. The proclamation effectively ended any hopes on the part of Southerners that these European powers would officially recognize the Confederacy as an independent country. England and France had abolished slavery decades earlier and would not openly oppose a country fighting to eradicate it.

­Beyond the fighting, the Emancipation Proclamation had a huge effect on Southern morale. Poor white farmers in the South were upset that the war's cause was no longer about states' rights versus the Union. Now these poor farmers were fighting to protect the "property" of wealthy plantation owners who could buy their way out of service in the Confederate Army. And the plantation owners, already in fear of the slave population that outnumbered them, grew even more paranoid, so they fought harder to control their slaves. The class war that erupted tore apart much of the Southern cause. And the newly freed persons further damaged "the cause." As Allen C. Guelzo states in "Lincoln's Emancipation Proclamation," "The damage wrought by the Proclamation went deeper, like a stake in the heart of slavery's collective psyche, and the dread grew in white Southerners as they beheld around them people who would not consent any longer to be things" [source: Guelzo].