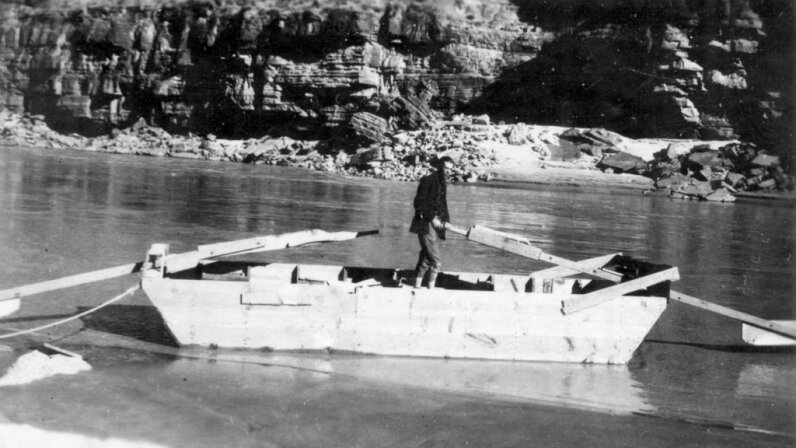 Glen Hyde, pictured here, set off on a voyage through the Grand Canyon for a honeymoon with his wife, Bessie. The trip was ambitious, but it didn't go as planned. public domain

History has no shortage of unsolved mysteries, and people have no shortage of interest in them. In this episode of Stuff You Missed in History Class, Holly Frey and Tracy V. Wilson keep us guessing with two creepy and true stories. But we'll start with one: the mystifying disappearance of a pair of newlywed adventurers.

When Glen and Bessie Hyde married in 1928, they had decided their idea of a honeymoon wasn't mai tais and all-inclusive resorts. Glen was an experienced boater, and the couple thought that boating the entire length of the Grand Canyon would be not just fun, but maybe even pioneering. "Up to that point, only 45 people had managed to travel the full length of the Grand Canyon by river," Holly says. "And a woman had never done it — Bessie wanted to be the first, and Glen wanted to be the fastest."

On Oct. 20, 1928, the pair started its journey — without life jackets, mind you. They met up with a few people along the way, including a mid-November rendezvous with Emery Kolb, a famous photographer and seasoned boatman who had a studio near the Grand Canyon. Kolb said that Bessie seemed ready to quit the journey, but Glen encouraged them to head out the next day. Adolph G. Sutro, grandson of a notable former mayor of San Francisco, embarked on the journey with the couple for several miles and was the last person to see them, on Nov. 18.

When the newlyweds didn't make it to Needles, California, by their planned arrival date in December, a massive search ensued. The military called in aerial surveillance and Native American trackers were employed, and the search party reached the Hydes' abandoned boat on Dec. 24.

But the mystery was far from over. Instead of a mess of a wreck, there was a perfectly intact scow. All the supplies were accounted for, neatly packed and organized. And the location didn't quite necessitate an emergency evacuation either. "They had made it 600 miles on the Green and Colorado rivers," Tracy says. "The boat was found just 46 miles from the mouth of the Grand Canyon, and according to the details of the journal, they had actually been ahead of schedule."

Neither of the Hydes' bodies has ever been found, but some tantalizing leads have cropped up. When a river guide named Georgie Clark died in 1992, her friends found a marriage certificate for Bessie and Glen Hyde in one of her drawers, as well as a birth certificate listing her name as Bessie DeRoss. But while provocative, there's been no substantiation of the documents. "A number of historians have weighed in on it and after closer investigation they really don't feel like this is the real deal," says Holly.

The Hydes' tidy disappearance is an eerie puzzle, but Tracy and Holly recount another unsolved mystery that proves even more creepy. A murder on an isolated farm is scary enough, but what about one where the murderer might have been secretly living with the victims for months? Listen to this episode of Stuff You Missed in History Class to see if you can solve the crime.

Now That's Interesting
There are plenty of commercial boating companies happy to ferry you (safely) through the Grand Canyon, including through the "Killer Fang" Falls Rapid at mile 232, where it's speculated Glen and Bessie may have died.