Before There Were Continents 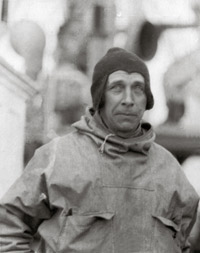 The German geologist Alfred Wegener was the first to use the term Pangaea.
Imagno/Getty Images

Until the end of the Jurassic period, we could have walked from North America to Europe. Of course, there were no humans on Earth during the Jurassic period, and neither "North America" nor "Europe" existed yet. There was no ocean separating different land masses. The theory currently accepted by the scientific community is that a single land mass called Pangaea slowly separated by way of continental drift. This "supercontinent" was a true continent -- a single land mass surrounded by water.

Most of us now understand that there are plates shifting under the land we stand on. We see this shifting on the surface in the form of volcanoes and earthquakes. The study of these tectonic plates, though, is a relatively recent development. It began in earnest in 1915, when a German geologist named Alfred Wegener first published his theory that Earth's land masses are essentially floating on a molten layer of magma (see How Earthquakes Work).

Wegener was the first to use the term Pangaea. His work set forth the idea that 200 million years ago, there was a single land mass on Earth. "Pangaea" is Greek for "all lands" or "all-Earth." Pangaea was surrounded by a single ocean that covered the rest of the Earth. Over time, as the magma heated up the Earth's crust and caused fissures, the crust and the land above it drifted apart. It didn't immediately break up into the pieces that show up on today's maps. What we see now is the result of millions of years of drifting. Wegener believed that the first break resulted in just two continents, and successive breaks over time ultimately left us with the current geography of Earth.

If the theory of continental drift is true, then our current continents are temporary formations. The makeup of the Earth will continue to change as magma continues to affect the crust on which our continents sit.

The continents we see on our globes will be around for a while, though, and many of us still chant "North America, South America, Europe and Asia, Africa Australia, Antarctica" when we need to recall their names. So, how did those well-ingrained names come about? Who decided to honor explorer Amerigo Vespucci with a continent, and is America even named after him? Find out in the next section.