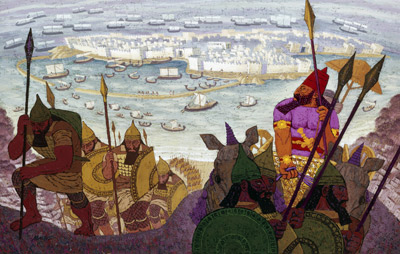 Phoenician sailors may have been responsible for naming Europe and Asia.
Robert Clifford Magis/National Geographic/Getty Images

The rest of the continents -- Africa, Asia and Europe -- were most likely named by the sailors who frequented their ports on naval and merchant voyages, but no one knows for sure. Asia may have initially been named for the Trojan ruler Asios. The name "Asia" (in its Greek form) is found in writings dating back to 440 B.C.

Some believe the names "Europe" and "Asia" come from Phoenician sailors who designated between the two destinations by the movement of the sun. "Asia" may reflect the word "acu," for "sunrise" or "east." Europe, which lies to the west of Asia, may be drawn from the Phoenician word "ereb," which means "sunset" or "west." Others propose that Europe was named for the character Europa from Greek mythology, who has connections to both the sun and the moon and is best known for being abducted and raped by Zeus.

"Africa" may have its roots in the Afarak people, a Berber tribe in the northern part of the continent; it may also stem from the Greek "aprike," which means "free from cold," or the Latin "aprica" -- "sunny."

Regardless of their exact origins, the names most likely came from simple oral use; sailors had to call the places something, so they made something up. After a while, the names stuck, eventually showing up in writings and on maps.

The origins of the continents' names are not written in stone, and neither are the boundaries. Ultimately, borders between continents are nearly as politically determined as borders between nations. For instance, neither Europe nor Asia is by definition a continent; neither is completely surrounded by water. They're connected, with the boundary between the two running through both Turkey and Russia, defined by mountain ranges. They were likely designated separate continents for reasons linked to nationalism and racial, cultural and trade distinctions. Likewise, North and South America are connected.

For these reasons, in certain parts of the world, people recognize only five continents: The Americas, Africa, Eurasia, Antarctica and Australia. In other parts, there are six continents, and in yet other areas there are seven. Geography, it seems, can be a very political discipline.

For more information on continents, plate tectonics and geographical politics, explore the links on the next page.

Australia is now widely referred to as Australia/ to include additional islands off its coast, including Papua New Guinea, Fiji, Micronesia and Polynesia.