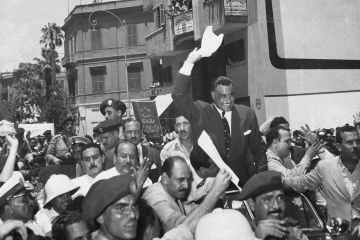 A huge crowd greeted Egyptian leader Gamal Abdel Nasser in August 1956 upon his arrival in Cairo from Alexandria, where he'd announced he had taken over the Suez Canal Company.
Hulton-Deutsch Collection/CORBIS

In 1956 the British and American governments were feeling unfriendly toward the Egyptian President, Col. Gamal Abdel Nasser, because he was wheeling and dealing with the communist bloc. Because of that relationship, the Brits and Americans backed out of an agreement to help finance the construction of Nasser's ambitious Aswan Dam project in Egypt. Nasser retaliated by seizing control of the Suez Canal and nationalizing it.

The canal was once known as the "lifeline of the empire." A vital supply route, it had been run by the Suez Canal Company, a French outfit that happened to have the British government as its largest shareholder.

Nationalizing the Suez, it turned out, was technically legal, but it nearly provoked a war. The problem was twofold. Whoever controlled the Suez Canal controlled the oil supply from the Middle East, so Europe suddenly felt vulnerable. But Nasser ran the canal as a business, and the supply continued to flow smoothly, assuaging initial fears.

The real problem had more to do with national pride. The French and British empires were in their twilight years, and Nasser's move had bruised their egos. In actual fact, the Suez Crisis, as it would come to be known, proved to be the beginning of the end of Europe's imperial era.

The British and the French convinced Israel to invade Egypt so they could then send in their own troops to supposedly play peacemaker between the two warring forces. The whole plan, an effort to reassert control of the canal, went south quickly when the U.S. refused to back it and the U.N. condemned it [source: State Department].

After much diplomatic finagling, the British and the French withdrew, humiliated. The Egyptians kept the Suez Canal, and boats kept chugging through it much as they had before. But the crisis had many consequences, one of which was the birth of a U.S. program called Operation Plowshare.

The idea of using nuclear weapons for peaceful purposes had been around since the early development phases of the atom bomb. But the concept didn't gain much traction until the Suez Crisis [source: Powell]. When it did, the reasoning went something like this: Who cares if the Egyptians decide to choke off the oil supply to Europe? We'll just excavate another canal at warp speed with some well-placed nuclear bombs!

Even though the crisis was resolved and this questionable solution of nuking out a new canal was never implemented, the notion was planted, and it quickly took root.