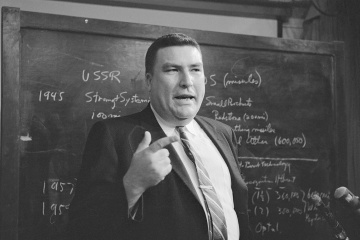 "And he shall judge among the nations, and shall rebuke many people: and they shall beat their swords into plowshares, and their spears into pruning hooks: nation shall not lift up sword against nation, neither shall they learn war any more." — Isaiah 2:3-4

In November 1956, shortly after Israeli forces invaded Egypt at the behest of Britain and France, the director of the Lawrence Radiation Laboratory – Livermore (LRL-L), Herbert York, convened a meeting of nuclear scientists to discuss the peaceful use of nuclear weapons. They wanted to call it Operation Plowshare because of the stuff Isaiah said about turning weapons into tools (i.e., beating swords into plowshares). The Atomic Energy Commission (AEC) approved the meeting and generally approved the idea.

LRL-L scientists duly established the Plowshare Program within the Division of Military Application (DMA) in the summer of 1957. By September, they had already conducted a test in Nevada codenamed Rainier, the first U.S. nuclear detonation completely contained underground. The test provided important data on the possibilities of using nuclear bombs for underground engineering projects. Rainier went well. So well, the AEC decided to publicly acknowledge that the Plowshare project existed.

Operation Plowshare was underway — but then it hit a major snafu. For years the United States, the Soviet Union and Great Britain had all been muttering about placing a ban on nuclear testing. Of course, they'd been doing a lot of testing in the meantime, much of it high in the atmosphere. But members of the public were getting nervous about nuclear fallout, and there was growing noise about adverse health effects.

Then, in March 1958, the Soviets declared that they weren't testing any more nukes. This unilateral action put all kinds of diplomatic pressure on Washington. President Eisenhower actually wanted very much to stop testing, and now he had the bargaining chip he needed to convince the skeptics in his administration. A comprehensive testing moratorium went into effect a short time later [source: National Security Archive]. The result: No more Rainiers. At least not for a while.

The timing couldn't have been worse for Operation Plowshare, but the intrepid scientists behind the project made do as best they could. In anticipation of an end to the moratorium, Dr. Edward Teller, director of the Livermore Laboratory, proposed that Plowshare scientists undertake studies of a series of ambitious potential projects. These included blowing a channel through the Kapingamarangi reef in the Marshall Islands, excavating a couple of new harbors in Alaska, hammering out a canal there while they were at it, extracting oil from some tar sands and shale, building some aquifers and doing a little mining [source: OSTI].

Then, in September 1961, Plowshare's luck turned. Ever since the Soviets had shot down an American U-2 spy plane in 1960, the two superpowers had become increasingly frosty toward each other. Then they started squabbling about the status of West Berlin. The Soviet military wanted to start testing again, and, under pressure, Khrushchev finally agreed [source: National Security Archive]. The moratorium was over, and Plowshare was back in business [source: OSTI]. If it was ironic that a supposedly peaceful project required a feverish cold war to continue, nobody remarked on it at the time, at least not publicly.