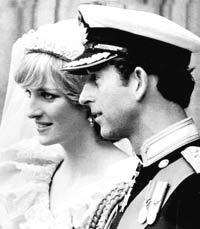 Princess Diana and Prince Charles on the steps of St. Paul’s Cathedral after their wedding ceremony on July 29, 1981
Photo courtesy Associated Press

Diana, Princess of Wales, died on August 31, 1997, after a car crash in Paris. Aggressive photographers pursued her vehicle in order to capture images of her with Dodi Al Fayed, who was also killed in the wreck.

The press hounded Diana since 1980, when journalists first caught Prince Cha­rles kissing a then-unnamed girl. The Honorable Diana Spencer, a nineteen-year-old kindergarten assistant, soon skyrocketed to fame upon her engagement to Charles in February, 1981. The couple wed that summer and Diana enchanted an estimated worldwide audience of 750 million with her billowing ivory gown and shy smile.

Tabloids soon switched from covering the fairytale match to publishing rumors that Diana was unhappy in her new marriage. She gave birth to the couple's eldest son, William, in 1982, and a second son, Harry, followed in 1984. As Diana and Charles' relationship continued to decline, she turned to charity work. In 1987, she opened the United Kingdom's first specialty AIDS ward and helped dispel myths about the disease by shaking hands and hugging people with HIV.

In 1992, Prime Minster John Major announced to Parliament that Diana and Charles were officially separating. After briefly withdrawing from public life, Diana began to court the press and use the media to express her struggles with bulimia, post-partum depression and her husband's long-running affair with Camilla Parker Bowles. Numerous stories of the Princess' own infidelities appeared, most notably her relationship with British cavalry officer James Hewitt. The Queen urged the estranged couple to seek a divorce, and they did so in 1996. Diana retained her title as the Princess of Wales, but was no longer referred to as Her Royal Highness.

Diana continued to make waves with her charity work -- helping HIV-infected people in Africa and calling for an international ban on landmines. By the summer of her death, Diana had struck up a new relationship with Al Fayed, the son of the owner of Harrods. Paparazzi­ followed Diana throughout her and Al Fayed's Mediterranean holiday and hounded her as she left a dinner in Paris. In the early morning of the August 31, Diana's Mercedes smashed into a tunnel pillar under the Place de l'Alma. She died after two hours in surgery. The driver, Henri Paul, who was also killed in the crash, had three times the French legal limit of alcohol in his blood and had been driving at upwards of 100 miles per hour (161 kilometers per hour) to escape photographers on motorbikes. A bodyguard, Trevor Rees-Jones, survived the wreck.

The British people expressed an unprecedented level of grief upon Diana's death. An estimated 2.5 billion people worldwide watched her funeral on September 6, 1997. Furor over the paparazzi's involvement in the crash resulted in stronger British media codes in December of 1997.