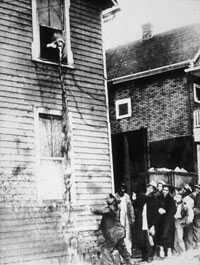 Bystanders attempt to catch moonshine being poured out of a second- story window by federal agents during a raid on an illegal still.
American Stock/Getty Images

In a perfect world, once a law or constitutional amendment is passed, the resources necessary to enforce it are plentiful and effective. Prohibition, unfortunately for its supporters, was not so easily enforced. Many challenges quickly surfaced when it came time to keep demon rum from being bought, sold or imported.

Fiorello LaGuardia, mayor of New York City, testified before the Senate judiciary committee and had this to say about Prohibition: "It is impossible to tell whether Prohibition is a good thing or a bad thing. It has never been enforced in this country."