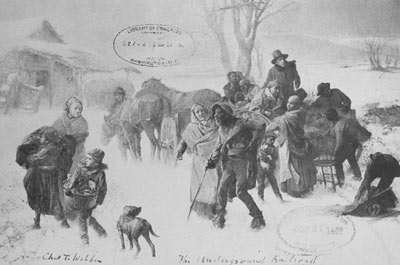 Depending on where the fugitive was coming from, the journey to freedom could take as little as 24 hours (on a train from Richmond, Va., to Philadelphia, for instance). It could also take years (escaping on foot from the Deep South). But where did the fugitives end up?

Most people think of the Underground Railroad as running North to free states. That is true, but the majority of fugitives headed to Canada, where they would be safe from the Fugitive Slave Act. Extreme northern areas of the U.S. were also known for protecting runaways. In the Deep South, from which the journey north was that much more treacherous, slaves also escaped to Spanish-owned Mexico and Florida.

­After days, weeks or even months of travel, the runaway might finally reach a safe settlement, typically of free blacks, friendly American Indians or a religious group (usually Quakers). There, he would often have to wait until someone secured safe passage for him on a northbound boat or train -- this is often where bribes came into play. Sometimes fugitives would settle in these first-stop communities, especially in free-black settlements. But more often they would continue to Canada.

­More and more runaways wanted to leave the country after the passage of the Fugitive Slave Act in 1850. But the act also emboldened Northern abolitionists, who could now make the case that the South was imposing slavery on the North. This encouraged more whites to sympathize with escaped slaves, and some Northern cities -- Boston, Buffalo, N.Y., and Philadelphia, for instance -- became safe havens for runaways.

Once runaways made it to their destination, interracial groups known as vigilance committees would assist them in establishing a new life. They provided some level of protection and sometimes helped them find work and a home. Successful runaways would sometimes try to buy back enslaved family members, which was dangerous because it could potentially expose their whereabouts.

The operation of the Underground Railroad obviously required the work of many people. Who were they, and how did they work together in such a secretive network?