How do you hide a warship in plain sight? Give it a razzle-dazzle paint job, of course! The idea of destroyers roaming the oceans decked out in crazy colors may seem far-fetched, but these painted ladies were part of a defensive strategy used in the early 20th century.

Instead of the boring steel gray paint found on most naval ships, many British warships were painted with a technique called "dazzle" or "razzle dazzle." It sounds fanciful, but the paint served a very serious purpose. At the time, warships lacked concealment technology, and no one had come up with a way to successfully camouflage them at sea. Razzle-dazzle paint was used not to hide the ships, but rather to make them a visually confusing target. With lines and shapes of contrasting paint going in varied directions, it was more difficult for the enemy on land, in the air or on another ship to estimate the type of ship, or its speed, size and direction.

Each of the razzle-dazzle ships had a different pattern and color scheme. While one would feature angular shapes in red, gray, black and white, another would sport lines and curves in blue, black and white. There was even a ship with zebra stripes, and one, the 1890s-era USS Narkeeta tugboat, was painted like a brick wall. Others made liberal use of orange, mauve and green. But it wasn't just the Brits going wild with design — the American ship USS Nebraska, launched by the U.S. Navy in 1904, featured a contrasting chevron pattern across its hull and around its smokestacks.

While dazzle camo had been a thing here and there, it really took hold in the World War I-era, particularly with Great Britain's Royal Navy. In 1917, artist and illustrator Norman Wilkinson was sailing on a patrol ship under dicey conditions near Great Britain when he had a colorful idea. Instead of attempting to camouflage ships from the torpedo-loaded submarines that posed the greatest threat, he proposed a radical paint scheme that would confuse the enemy. The Admiralty took him up on it. (As with all things historical, there's debate over who came up with the idea. Listen to the Stuff You Missed in History Class podcast embedded above for more on dazzle camo.)

Soon, he was overseeing a team of artists who were painting warships in contrasting colors and shapes to hide the ship's true form. The eye-catching ships were described by one newspaper reporter as a "flock of sea-going Easter eggs." Another reporter called them "floating Cubist paintings."

Other Allied forces followed suit, with the U.S. Navy painting about a dozen of its warships with crazy colors and patterns. Each side of a ship sported different patterns and colors, but all of these wild paint jobs had certain elements in common. Curves were used to simulate false bow waves several feet back from the ship's actual bow, giving the illusion of a shorter length. Patterns were used at the bow and stern to make it difficult to tell them apart. Shapes were painted on smokestacks to make it seem as though they were facing the opposite direction. Bold shapes, like rectangles, stripes and triangles, broke up the ship's shape.

Some of the dazzle paint jobs appeared decidedly Cubist, an overlap that wasn't lost on Picasso, who claimed the patterns were the product of Cubism. However, Wilkinson never attempted to lay claim to the modernist movement. He was honored by Great Britain's Royal Commission on Awards to Inventors for creating dazzle painting. And, for most of his career, his forte was detailed paintings of ships and landscapes. Wilkinson's work had even been commissioned for the luxuriously appointed smoking rooms on the Titanic.

Even airplanes, like this 1916 Sopwith camel with experimental camouflage, got in on the razzle-dazzle action.
IWM/Getty Images

While there wasn't much evidence at the time that dazzle painting helped ships avoid enemy fire, it did wonders for morale. The crews on board simply felt safer in dazzle ships.

Unfortunately, only a handful of these colorful ships survive today. One such ship, The Snowdrop, worked as a ferry in England, complete with its original painted patterns designed by Sir Peter Blake — the same artist responsible for the Beatles' "Sgt. Pepper's Lonely Hearts Club Band" album cover.

The HMS President, painted in grey, black, orange and white by artist Tobias Rehberger is permanently docked on the River Thames in London. And the ship Edmund Gardner shows off its multi-color stripes at a maritime museum in Liverpool, England.

In 2014, Venezuelan artist Carlos Cruz-Diez gave the historic British ship Edmund Gardner a dazzle makeover.
John Lord/Flickr
Now That's Cool
If you want to be a part of history, the HMS President — one of the few surviving warships used during World War I by the Royal Navy — will oblige. The dazzle-painted warship is permanently docked along the Thames in London and can be rented for weddings and other events.

Google Has a Shrewd Plan to Fight ISIS Recruitment

5 Reasons Tardigrades Will Outlast Us All 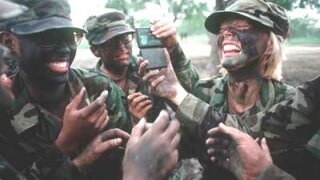 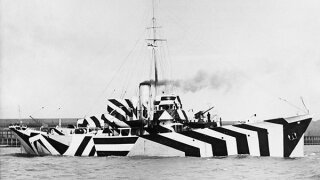