Why Is Blackface Controversial? Just Look at Its History

Browse the article Why Is Blackface Controversial? Just Look at Its History 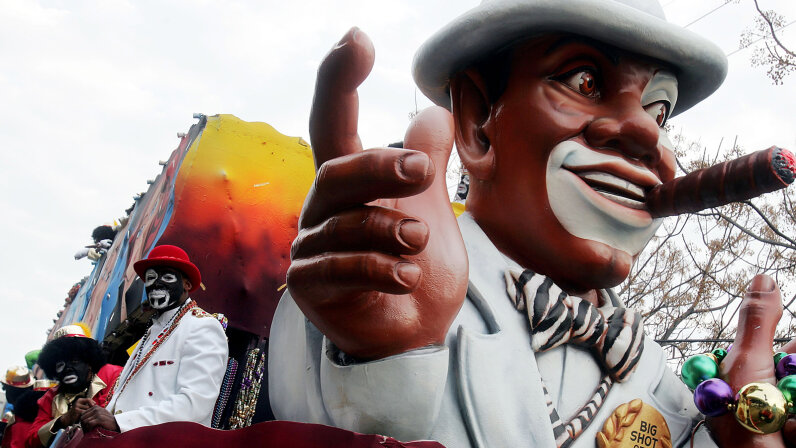 People dressed in blackface ride on a float during the Zulu parade during Mardi Gras festivities in New Orleans in 2005. Mario Tama/Getty Images

It's 1889. Missouri newspaper editor Chris Rutt and his friend Charles Underwood have created the world's first pancake ready-mix, but they need a scheme to sell it. Rutt had seen a minstrel show that featured the popular song "Old Aunt Jemima." Inspired by the character, who was often portrayed by a white male in blackface and drag, he decides to name their new breakfast concoction "Aunt Jemima" and attach her stereotypical mammy image — a genial and submissive black woman who worked as nanny or housekeeper for white families — to the product.

But the two fail in marketing the business, and they sell the company to the R.T. Davis Milling Co. in 1890. R.T. Davis Co. not only fine-tunes the pancake recipe, but it also whips the Aunt Jemima marketing ploy into shape. The company decides to turn Aunt Jemima into a real black woman, and they put former slave Nancy Green on display at the 1893 World's Exposition in Chicago, where she sings songs, cooks pancakes and tells euphemistic stories about the Old South. Fast-forward more than 100 years, past many iterations of Aunt Jemima and tons of boxes of pancake mix sold, and vestiges of the company's racist roots remain. And so does blackface.

As is evident from the news, blackface — the centuries-old practice of using makeup to transform into a caricature of a black person — is still alive and well. College students across the world wear costumes and blackface at Halloween parties. Performers appear on stage and television in blackface. Businesses and homes still proudly display darky iconography (think googly white eyes, ink-colored skin and big red lips) and racist memorabilia without addressing their complicated history.

Blackface Then and Now

That complicated history of blackface goes way back. So, the fact that people are still strolling into shindigs in blackface should come as no surprise.

But the reason that current blackface instances — like the old photo of rapper Drake in blackface that Pusha T surfaced — blow up in the news and in social media conversation is because the practice has long been controversial and deemed harmful to popular perception of black people.

Take abolitionist Frederick Douglass' comments on minstrels in the newspaper The North Star, 1848, where he called them "the filthy scum of white society, who have stolen from us a complexion denied to them by nature, in which to make money, and pander to the corrupt taste of their white fellow-citizens."

Black people have been paraded for the enjoyment of white people and imitated by white actors for centuries. In the book "Black Like You: Blackface, Whiteface, Insult & Imitation in American Popular Culture" by journalist and cultural commentator John Strausbaugh, the author even argues that the seeds of blackface were planted "with the first organized contacts between Europeans and Africans." But blackface as we know it today, a cultural practice meant to mock, exoticize, disparage, pity and generalize African-American people and culture, can be traced back to 19th-century theater.

A Short History of Minstrel Shows

Minstrel shows started out as performances by white male minstrels (traveling musicians) who wore blackface and caricatured slaves. The shows were basically an absurd blend of stereotyping, racism and capitalism at its finest — minstrels parodied black song and dance, burned cork to blacken their faces and pretty much acted like fools on stage, touring the U.S. and sometimes Britain to amuse white audiences. Most blackface minstrelsy was performed by nonblacks, but black people took part in the theatrical hijinks, too. (Billy Kersands, the composer of the song "Old Aunt Jemima," was a black comedian known for his blackface minstrelsy and large mouth — seriously.) In fact, after the "Father of Minstrelsy" Thomas Dartmouth "Daddy" Rice popularized minstrel shows with his Jim Crow character in the early 1800s, some abolitionists embraced the platform as a vehicle for spreading antislavery sentiment.

At first, minstrels performed solo, perpetuating stereotypical narratives like that of the mammy, the uneducated rural slave and the clumsily sophisticated black man. By the mid-1800s, the prevalence of minstrel shows had grown so tremendously that minstrel ensembles were popping up everywhere and a show formula had developed. Christy Minstrels, a group that played on Broadway for almost a decade, established a format where the band faced the audience in a semicircle, the interlocutor sat in the center and the end men played the tambourine and clappers. (The end men were named Mr. Tambo and Mr. Bones, respectively.) There were jokes, ballads, one-act plays, dancing, burlesque and a bunch of other acts that generally make a show entertaining.

Minstrel shows were a hit for years to come — they even gained traction in the last decades of the 19th century, after emancipation and in cities where white people didn't interact much with black people. Famous performers like Al Jolson, Shirley Temple, Ronald Reagan and Judy Garland contributed to the popularity of blackface in the early 1900s, and amateur minstrel shows persisted in small local venues until the mid-1900s. But by the late 1800s, minstrel shows were dwindling — vaudeville performances and movies were on the rise, and eventually the civil rights era rendered blackface minstrelsy unacceptable. The problem was, the disparaging portrayals, belittling stereotypes and prejudices toward black people the shows imparted were already deeply entrenched in the American cultural consciousness.

Blackface minstrelsy perpetuated messages that black people are buffoonish, dim-witted, exotic and enigmatic, among other negative characterizations. Studies show that media portrayals can affect the way people perceive blacks in real life and that stereotypes can affect the way people interact with others and perform. And there's strong evidence that implicit bias, the tendency for people to attribute certain characteristics to different demographics based on stereotypes, can affect how people treat blacks. For instance, metro areas with greater average implicit bias have more racial disparities in police shootings. To this day, the perception of black males as aggressive and criminal remains and justifies the use of violence.

As research and time have shown, there are long-lasting implications of assigning negative stereotypes to black people. (Just look at how the term "Jim Crow" transformed to describe laws in the southern United States that mandated discrimination based on race.)

So, when the internet erupts in an uproar against a person wearing blackface, the problem is not political correctness, and it is not generational sensitivity. Blackface's legacy is one of white supremacy and exploitation of black identity, and the weight and consequences of that history cannot be divorced from it, no matter how great a student may think a costume is. As Strausbaugh put it, "The problem, of course, is that so few of us know our history."

Now That's Interesting
After emancipation and into the Jim Crow era, African-American blackface performers began to add more nuance to their performances, attempting to humanize their image and advance black politics.