by Julia Layton
Prev NEXT
6 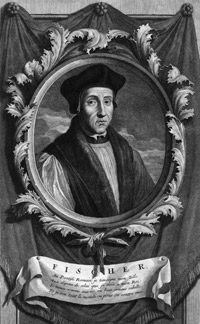 Henry VIII and Cardinal Wolsey went to John Fisher when they first came up with the idea of annulling the king's marriage. Fisher was a priest, a cardinal and confessor to Henry VII's mother before her death. He founded St. John's College at Cambridge. He was widely respected in Europe as a theologian after publishing works decrying Luther's movement to reform the Catholic Church. When Henry and Wolsey approached him for advice, he was clear: An annulment would go against the will of God.

They proceeded anyway, and Fisher never relented in his opposition. He openly defended Catherine, making great trouble for Henry. When the Supremacy Act passed in 1534, Fisher, with Sir Thomas More (keep reading) at his side, refused to take the required oath because it was a repudiation of papal authority. They were sent to the Tower of London, the city's prison, where they waited to find out what Henry would do with them. It was after this that the pope made Fisher a cardinal. Henry took this as a slap in the face, and Fisher's fate was sealed.

Fisher was dragged in front of the king's council many times during his imprisonment, and he always refused to speak about the Supremacy Act. Finally, under the guise of questioning Fisher about the act off the record, Henry's lead council got Fisher to say that Henry could never be supreme ruler of the church. The recently passed Supremacy and Treason Act made denying the king's supremacy an act of treason. Cardinal John Fisher was beheaded in 1535. The Catholic Church made him a saint 400 years later.

The Supremacy Act that annulled Henry's marriage opened the door for him to indulge his every marital desire. He married five more women after Catherine. He had his second and fifth wives beheaded. Catherine Howard was wife number five, and her crime was far less political than Fisher's.