by Julia Layton
Prev NEXT
2 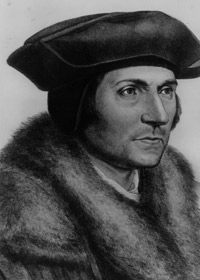 Thomas More was a statesman, writer and Catholic martyr who refused to swear to the Acts of Supremacy and Succession.
Rischgitz/Getty Images

Thomas More was a noted humanist, lawyer, theologian, historian, philosopher, statesman and devout Catholic. He wrote "Utopia," a famous work of humanist principles that was read by every learned member of English society, and is still part of the cannon in universities. Shakespeare based his play "Richard III" on More's book "History of King Richard III." This accomplished and respected man became one of Henry VIII's advisors in 1518.

Leading up to the Supremacy Act of 1534, More tried to support the king as much as he could without betraying his religious beliefs. On at least one occasion, he was the king's spokesman in Parliament regarding the break from the Church. He did not, ultimately, stand in Henry's way, but he stayed true to his convictions. He didn't attend the coronation of Anne Boleyn, and he refused to swear to the Acts of Supremacy and Succession. The former offense angered the king, but the latter was an act of treason.

More's fall was swift. He was charged with conspiring with Elizabeth Barton, the nun whose visions so incensed the king. But a letter turned up that absolved him: He had written to Barton telling her to stay out of the king's business. When called on to swear to the Supremacy Act, More allowed that Henry was the supreme leader of the church but said he couldn't take the actual oath because it included a statement against the pope. More was taken to the Tower of London. He didn't much mind it, the prison life suiting his asceticism [source: Britannica]. In 1535, he was beheaded for treason. His head sat on display on London Bridge for a month after his death [source: Catholic Encyclopedia].

While imprisoned, More wrote the book "A Dialogue of Comfort Against Tribulation," viewed as a masterpiece of religious literature [source: Britannica]. More was canonized by the Catholic Church in 1935, the same year as John Fisher.

Finally, we get to one of the most ironic executions of Henry's reign. Anne Boleyn died by the same law that allowed her to become queen.