Adolf Hitler Was a Painter, and People Pay Big Money for His Work

by Chris Opfer Nov 18, 2015
The paintings Adolf Hitler created as a young artist occasionally come up for auction, as the one above did in June 2015. D. Fagan/HowStuffWorks; Roger Viollet & Christof Stache/Getty Images

Adolf Hitler & Co. had a thing for fine art. As recently as in 2012, German officials seized a Nazi-looted collection – including works by Renoir, Monet and Max Lieberman – from a Munich apartment. That's not to mention the hundreds of paintings and postcards created personally by the leader of the Third Reich in the years leading up to his reign of terror.

A signature reading 'A. Hitler, 1909' on the watercolor titled 'Blumenstillleben,' one of the paintings sold in 2015 by the Weidler auction house in Nuremberg.
Christof Stache/AFP/Getty Images

Although the Allies worked diligently to capture and or destroy many of the hundreds of works that Hitler is believed to have created during his pre-political life as a starving artist, some remain held by individual collectors. The works – known for a grim and impersonal aesthetic – occasionally go up for sale on the open market. It costs a pretty penny to own a Hitler original – but who would actually buy one?

In June 2015, an unnamed group of investors reportedly forked over $450,000 at an auction in Nuremberg for a set of watercolors each signed "A. Hitler." That the sale of one of history's most brutal genocidal dictators' creative output came in the city where a number of his henchmen were brought to justice couldn't have been lost on the buyers. You see, the paintings aren't all that good.

Before the Fuhrer took control of a wide swath of Europe and Northern Africa and presided over the death of millions during the Holocaust, he was a "small time professional painter" who crafted "innocuous and trivial landscapes," wrote Italian art history expert Sergio Salve in an intro to the 1984 book "The Water Colours of Hitler."

In fact, Adolf Hitler was twice rejected by the Academy of Fine Arts in Vienna, according to historians. What draws collectors and art critics to Hitler's work isn't the craftsmanship that went into it, but the window that many seem to think it might provide into the soul of one of history's most oppressive dictators.

In addition to the Nuremberg auction, collectors have shelled out hundreds of thousands of dollars for a piece of the Nazi leader's original artwork. In 2009, a British auction house hauled in nearly $150,000 for 15 of Hitler's early paintings and sketches, a collection that includes one particularly haunting self-portrait.

But many of Hitler's other paintings will never reach the auction block if Uncle Sam and others have anything to do with it. Deep within the bowels of U.S. Army's Center of Military History is a treasure trove of Nazi art and propaganda confiscated by the Allies during World War II, including a number of Hitler originals. It's unclear just how large that collection is because the works have never been put on display.

We do know specifics about four U.S. Army-held Hitler watercolors that were the subject of a decades-long federal lawsuit, in which a Texas businessman unsuccessfully asked a court to order the government to turn the paintings over to him as part of a collection that he purchased from a German photographer.

Meanwhile, the Bavarian State Archives accept Hitler originals as donations in order take them off of the market.

Now That's Cool
Two of the men who played leading roles in defeating the Nazis in World War II were also avid painters themselves: Dwight Eisenhower and Winston Churchill.

If We Can’t Chat With Aliens, We Could at Least Ring Their Doorbell

Meet Weyl, the Massless Particle That Could Upend Electronics 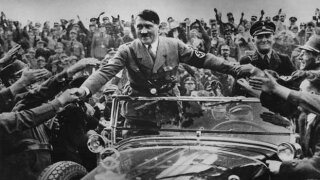 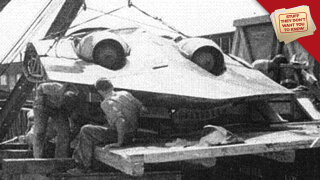 Stuff They Don't Want You to Know Video: Did Nazis really make "UFOs"?