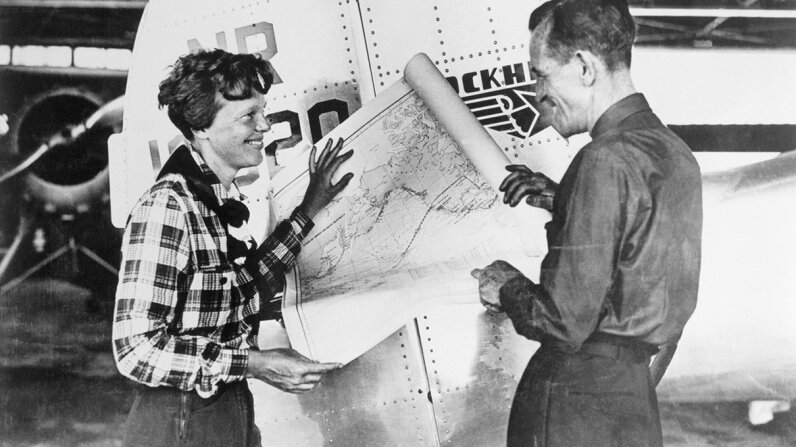 Pilot Amelia Earhart and her navigator Fred Noonan hold a map of the Pacific that shows the planned route of what became their final flight. Bettmann Archive/Getty Images

Ever since the twin-engine Lockheed Electra flown by trailblazing aviator Amelia Earhart and her navigator Fred Noonan vanished on July 2, 1937, the question of what happened on the Pacific Ocean flight has been one of history's most compelling mysteries.

Now, around the 80th anniversary of Earhart's legendary disappearance as the duo flew from New Guinea to Howland Island, two separate high-profile probes each say they've found new evidence. But there's a catch. The investigators have two different explanations — and both can't be right.

In late June, an expedition sponsored by The International Group for Historic Aircraft Recovery (TIGHAR) and the National Geographic Society traveled to Nikumaroro, formerly known as Gardner Island. This uninhabited coral atoll in the Pacific Ocean lies about 360 nautical miles (667 kilometers) from Howland, Earhart and Noonan's intended destination.

This 2001 satellite image shows the Pacific atoll Nikumaroro, the most southerly and westerly of the Rawaki Islands, Kiribati. TIGHAR investigators believe it is where Amelia Earhart and Fred Noonan crashed in 1937, and recently took trained dogs to help search for evidence on their latest expedition there.
GEOEYE/Getty Images

The TIGHAR researchers think that Earhart and Noonan veered off course and were forced to land on Nikumaroro, where they possibly survived for a while as castaways but eventually perished.

Rising tides and surf eventually swept their airplane off the reef edge into the ocean off Nikumaroro's western side, where pieces of the wreckage may remain in deep water.

According to TIGHAR's website, a British official who visited the reef in 1940 reported finding a partial human skeleton — which subsequently was lost — and remnants of a campfire there, but never notified U.S. authorities. In recent years TIGHAR has mounted numerous expeditions to Nikumaroro and recovered artifacts that investigators see as evidence of Earhart's presence on the island. The latter items include a piece of aluminum that they say may have been a patch visible on the Electra in a June 1937 photo, and glass shards from what possibly may have been a jar of freckle ointment used by the fair-skinned aviator.

The latest TIGHAR-National Geographic expedition brought along four forensic dogs specially trained to detect human remains. After four days of searching, the team wasn't able to find any bones. But in one spot on the island, the dogs, all border collies, detected the lingering scent of chemicals left behind by human decomposition, according to TIGHAR executive director Richard Gillespie.

A jar discovered on Nikumaroro Island in 2006, left, is pictured next to a 1930s container for Dr. C. H Berrys Freckle Ointment. Explorers think the pot of anti-freckle cream, found in five pieces and reassembled, belonged to long-lost female aviator Amelia Earhart and came from her makeup collection.
TIGHAR/Barcroft Media/Getty Images

"The bones either were taken away, or have been chewed by rats, but there are no more bones there to find. The dogs did confirm that we've got the right spot," says Gillespie.

According to a National Geographic article on the expedition, the researchers also filled five Ziploc bags with soil from the spot, which will be sent to a lab in Germany in the long-shot hope that the soil might hold DNA samples that could be linked to Earhart.

"We are quite sure the plane was washed off the reef by rising tides and surf, and broke up in the surf," says Gillespie. "So that all that's left are pieces that are on the reef slope, probably now embedded in the reef, maybe completely covered by coral. Hard to find, but they should be there."

Gillespie says future TIGHAR expeditions will search for those pieces.

Meanwhile, a separate investigation has unearthed a vintage naval intelligence photograph from the National Archives, which depicts figures that other probers believe could be Earhart and Noonan on a dock in Jaluit Atoll in the Marshall Islands. In the photo, a Japanese ship can be seen towing a barge, with a large object on it that could be Earhart's and Noonan's plane. Les Kinney, the Earhart researcher who originally found the photo, told NBC News that he believes the photo is evidence that the aviators were captured by the Japanese.

Shawn Henry, a former FBI executive director also participated in the probe, which was the basis of a History Channel documentary, "Amelia Earhart: The Lost Evidence," that aired Sunday, July 9, 2017. Henry told NBC News: "When you pull out, and when you see the analysis that's been done, I think it leaves no doubt to the viewers that that's Amelia Earhart and Fred Noonan."

The idea that Earhart and Noonan fell into Japanese hands dates back at least to the 1960s. According to a recent Japan Times article, numerous locals on Saipan, an island that was part of the Japanese empire's line of defenses, claimed to have seen the two fliers. And the daughter of a former police chief on the island says she once overheard him saying that Earhart had been shot by the Japanese military.

UPDATE: A Japanese military history blogger claims to have uncovered a copy of the photograph in question, published in a book in 1935, two years before Earhart and Noonan crashed. The History Channel tells NPR that it is investigating the claim.

The Earhart-was-captured scenario obviously conflicts with the version of events favored by TIGHAR, in which Earhart became a castaway and perished on a remote island. Dorothy S. Cochrane, curator for general aviation at the National Air and Space Museum in Washington, D.C., casts doubt upon both theories. In an email, she says that the expeditions to Nikumaroro have yet to turn up hard evidence of Earhart's or Noonan's presence there.

"The US Coast Guard overflew the island with[in] days of Earhart's disappearance and did not see anything to prompt a land search on the island," she says.

Cochrane is similarly skeptical that the newly surfaced photograph is proof of Earhart's and Noonan's capture. "The two people in question cannot be readily identified, since their faces are not clearly visible," she says. To make things more difficult, the figure that the probers claim is Earhart is sitting with her back to the camera. "Is it a man or woman, Caucasian or Asian? I find the photo inconclusive at best."

Additionally, Cochrane notes that "both the US and Japanese governments have steadfastly denied that Earhart and Noonan were captured and died at the hands of the Japanese prior to or in World War II." The accounts of island residents, she says, "have been pro and con."

Cochrane favors another explanation, one seemingly supported by radio operators' logs, that Earhart and Noonan made it to within 100 miles (161 kilometers) of their intended destination of Howland Island, before crashing in the ocean. But she says that until investigators turn up something that's "a definitive piece of that aircraft," such as an engine with a serial number or other markings, the mystery will remain very difficult to resolve.

"But that won't stop the theories, because it is an enduring mystery," she says. "And Amelia Earhart is worth remembering."

Amelia Earhart, pictured here circa 1935, captivated popular culture in the West well before her 1937 disappearance.
FPG/Getty Images
Now That's Interesting
Before her fateful flight, Earhart's Lockheed Electra was used in a 1936 Hollywood comedy, "Love on the Run." Here's a YouTube clip of a scene from the film.