Browse the article What was Archimedes' death ray? 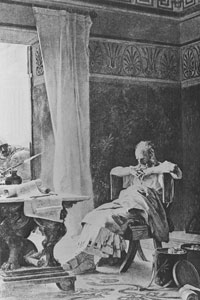 Economist Jeffrey D. Sachs once made a compelling argument that humanity will eventually be saved from any crisis simply by reproducing [source: Scientific American].

We can reproduce our way out of any serious problem -- say, for instance, global food, energy or water shortages -- because the more humans who are born, the more geniuses will be born. The more geniuses humanity has on hand at any given time, the likelier our chances of thinking our way out of crises. "[I]t is genius above all that propels global human advance," wrote Sachs [source: Scientific American].

Some geniuses propel advancement more than others. The Greek mathematician Archimedes is one good example that all geniuses are not equal. For more than 50 years, Archimedes churned out answers to great ­mathematic and practical questions. He is responsible for calculating pi; that alone would have assured him a place in the annals of history. But he also created calculus proofs 2,000 years before calculus itself was invented. He concluded that objects lose an amount of weight when they're in water equal to the weight of the fluid they displace (Archimedes' principle of hydrostatics). You can thank Archimedes for steel ships and hot air balloons.

Archimedes was every bit a mad genius, and he was socially handicapped by the breadth of his intellect. When he came up with his principle of hydrostatics, he'd been in the bath. Archimedes was so gripped by excitement at his breakthrough that he ran naked through the streets shouting "Eureka!" And his death came from a lack of comprehension that he was in danger. A Roman soldier sent to capture Archimedes entered his home. Archimedes, in the thick of determining a geometry proof using figures drawn in the sand on his floor, dismissed the stranger: "Do not disturb my diagrams," Archimedes told him.

The soldier flew into a rage and beat the 75-year-old genius to death. The soldier had been two years in coming; the Romans had held Archimedes' home of Syracuse under siege for two years. But Archimedes' war machines had kept the Romans at bay. His death ray is said to have proven particularly effective.

Archimedes was born in 287 B.C. in the city-state of Syracuse, then a part of ancient Greece, in what is modern-day Sicily. Aside from his travels to Egypt for his formal education (read more about that in "Did the ancient Greeks get their ideas from the Africans?"), Archimedes spent his life in Syracuse. When the Roman army set sail to lay siege on his home in the year 214, Archimedes turned his attention from calculations to finding new and inventive ideas for dealing death to Roman legions.

One of Archimedes' more famous quotes is, "Give me a lever long enough and a place to stand and I will move the world" [source: Stanford]. Archimedes used his knowledge of physics to fend off Roman ships approaching the fortified walls of Syracuse. One of the war machines Archimedes created was a giant iron claw, operated by virtually the entire population of Syracuse from inside the city's walls. Outside, the claw was capable of picking up entire Roman ships and plunging them into the sea. Archimedes used catapults and heavy timbers to hurl objects at the ships in the distance [source: Archimedes Palimpsest].

These war machines were complex, but perhaps the most effective (and coolest sounding) of Archimedes' instruments of destruction was the death ray. The name evokes thoughts of some huge, clumsy steampunk contraption pushed to the edge of the Syracusian walls. One can imagine the Roman soldiers' terror-widened eyes as the death ray came into view and made an increasingly high-pitched hum as it powered up before suddenly unleashing a deadly laser upon the ships, reducing them to atoms in one massive burst.

This wasn't the case. Instead, the death ray was actually a series of mirrors that reflected concentrated sunlight onto Roman ships. The ships were moored within bow and arrow range (in ancient Greece, anywhere from 200 to 1,000 feet (about 60.96 to 304.8 meters)). According to legend, the Roman ships were burned by the collective, condensed sunlight shone from these mirrors [source: McLeod]. Ship after ship in the Roman fleet caught fire and sank in the Mediterranean, casualties of the death ray.

The historian Galen was the first to describe the death ray in an account of the sack of Syracuse he wrote more than 350 years after the siege ended. Although other historians recorded the siege in earlier writings, none mentioned the death ray. Because of these earlier omissions of the death ray, the contraption's often viewed as pure myth, fantasy or exaggeration. Over the years, numerous attempts have been made to prove or disprove whether Archimedes' death ray could've worked -- but these experiments have yielded mixed results. At least two of them proved the death ray was possible. Keep reading to find out about those. 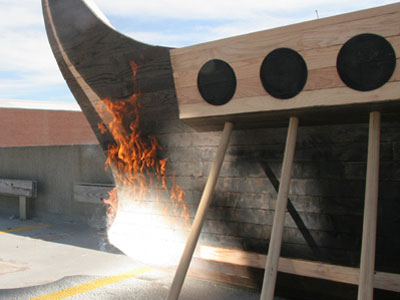 Electromagnetic waves of light carry with them heat energy. This energy is reflected by shiny surfaces, such as smooth, polished metal or glass. The smoother and flatter a mirrored surface, the less the light wave is dispersed and the truer the reflected beam is to the original. With all of this in mind, and with the brief accounts of Archimedes' death ray available in the annals of history, some researchers have set out to determine if the death ray is fact or fiction.

Discovery Channel's "Mythbusters" gave it a shot twice in seasons one and three. Both times the experiments failed, and Archimedes' death ray received a "busted" decree. While the Mythbusters weren't able to replicate Archimedes' storied success, other researchers have. A group at the Massachusetts Institute of Technology (MIT) undertook a death ray experiment in 2005, and constructed a 10-foot (3 m) long, one-inch (2.5 cm) thick red oak version of a Roman ship. Using 127 one-foot (0.3 m) square flat mirrors arranged in a parabola (a concave arc), the researchers managed to set the model ship on fire.

After 10 minutes of reflected sunlight (without any cloud coverage interrupting the direct stream of light), the MIT team managed to cause flash ignition in the patch of the ship where the beams of sunlight were concentrated into a single area. This meant that the temperature of the area had reached 1100 degrees Fahrenheit (593 degrees Celsius). The ship caught flame and burned before the MIT researchers put it out. They had proven that Archimedes' death ray was possible. Or had they?

There are still some problems with the MIT experiment. First and foremost, the Roman ship under attack by MIT's version of the death ray was motionless -- the successful experiment took place on a rooftop. This means that the beam of reflected sunlight had time to do its work without interruption from the motion created by waves. This wouldn't have been the case for Archimedes, who would have the Mediterranean to contend with. Even a calm sea would produce slight motion in the boat, making it difficult to ignite a single area since the concentrated beam wouldn't rest in one area for very long.

This contention was dealt with in 1973, when a Greek engineer undertook his own experiment to get to the bottom of Archimedes' death ray. He assembled 70 soldiers, each holding a 5-feet by 3-feet (1.5-m by 0.9-m) mirror. The concentrated beam reflected by the mirrors set a row boat 160 feet (49 m) offshore aflame. It is possible, then, that Archimedes' death ray could have worked.

A great many people remain skeptical, however. Why hadn't any historians writing shortly after the siege of Syracuse mentioned the ingenious device when recounting the event? Perhaps the best argument against the historical reality of Archimedes' use of mirrors at the siege is that they weren't used again in later battles. Archimedes biographer Sherman K. Stein writes, "had the mirrors done their work, they would have become a standard weapon; yet there is no sign that they were added to the armaments of the time" [source: Stein].

Still, the legend persists. Thanks to continued interest among researchers who carry out their own experiments, Archimedes' death ray has been kept alive over the millennia. And even if the death ray's plausibility is definitively disproven in the future, it will have little dampening effect on the enduring genius left by Archimedes.