How Attila the Hun Worked

Browse the article How Attila the Hun Worked 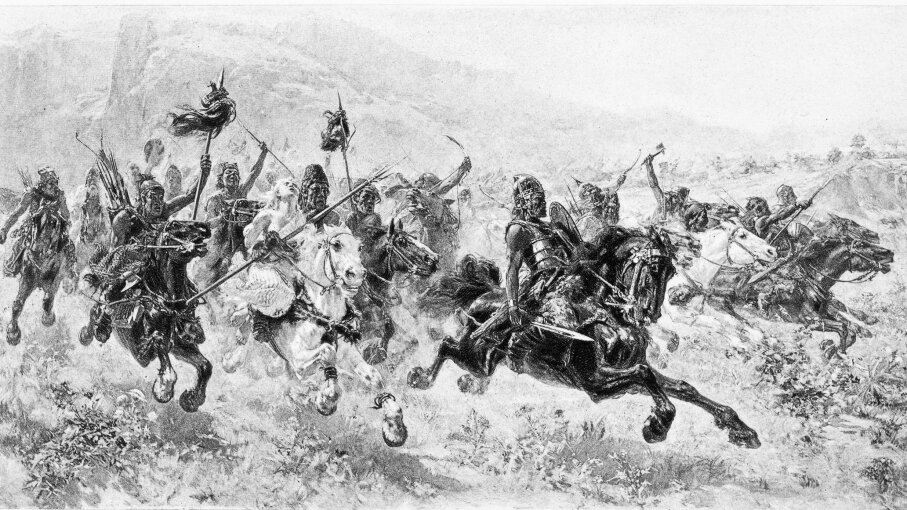 Many fierce warriors slashed, burned and blazed their way through the ancient world in an attempt to conquer and dominate — Julius Caesar, Alexander the Great and Genghis Khan, to name a few. But perhaps no ancient warrior was as brutal and storied as Attila the Hun.

Over a 10-year span, Attila and his army invaded the territories that today encompass Hungary, Spain, Italy and Greece. They burned towns and villages after stripping them of their belongings. One historian wrote that "Attila and his army seemed genuinely to enjoy warfare, the rigors and rewards of military life were more appealing to them than farming or attending livestock."

But a portrait of a rampageous barbarian is not a full picture of Attila. Although he could not read and write, he was born into a powerful Hun family. He knew a lot about human nature and how to rule with cunning rather than force. Exaggerated stories of his viciousness, some of which he may have spread, also helped him conquer without necessarily killing a lot of people.

Attila was born around 406 C.E. in Pannonia, then a province in the Roman Empire. Today, it's part of Hungary. The nomadic Huns, who were animal-herders, had migrated to Europe from Central Asia in 370. By the time Attila arrived into the world, the Huns had been long feared throughout Europe.

They were known for their exceptional skill as horsemen -- their steeds reportedly joined in the battles with their teeth and hooves -- and as mounted archers. Their weapon of choice was the famed Hun bow, a recurve bow whose ends curved back on itself, creating more torque and the ability to pierce armor 100 yards (91 meters) away. The bows were also smaller than traditional bows, and thus more maneuverable. Additionally, the Huns were infamous for their strategic, ferocious battles and impressive mobility [source: Andrews].

Growing up in a privileged household, Attila and his brother Bleda were taught sword fighting, archery, equestrian skills, and military and diplomatic tactics. Sometime around 430, when Attila and Bleda were young men, two of their uncles jointly ruled the Hun Empire. The brothers took over as co-rulers in 434. But 11 years later, in a power-grab, Attila murdered his brother to become sole ruler of the Huns.

By the time Attila became king of the Huns, the tribe had quit the nomadic life and were based in the Great Hungarian Plain, where they had developed an infantry army. Over the next two decades, Attila and the Huns pillaged and destroyed innumerable Roman cities in order to expand their kingdom, which eventually included large portions of the Eastern and Western Roman Empires. (On today's map, the Hun Empire at its greatest would stretch from Germany in the west to Romania in the south, the Netherlands in the north, and Russia and Kazakhstan in the east.) Because of his barbaric, bloody battles, Attila became dubbed "Flagellum Dei," or "Scourge of God."

Although a fierce warrior and looter, Attila is said to have lived humbly in large a log house decorated with animal skins. By contrast, his subordinates often adorned themselves, their homes and their horses with gold, silver and jewels. He is also said to have treated his own people justly. He died in 453 under mysterious circumstances and his oldest son, Ellac, was his appointed successor. But Ellac wasn't the strong leader his father was, and he soon scrapped with his brothers for control. The Hunnic Empire fell apart by 469 and never revived [sources: Mark, Biography]. 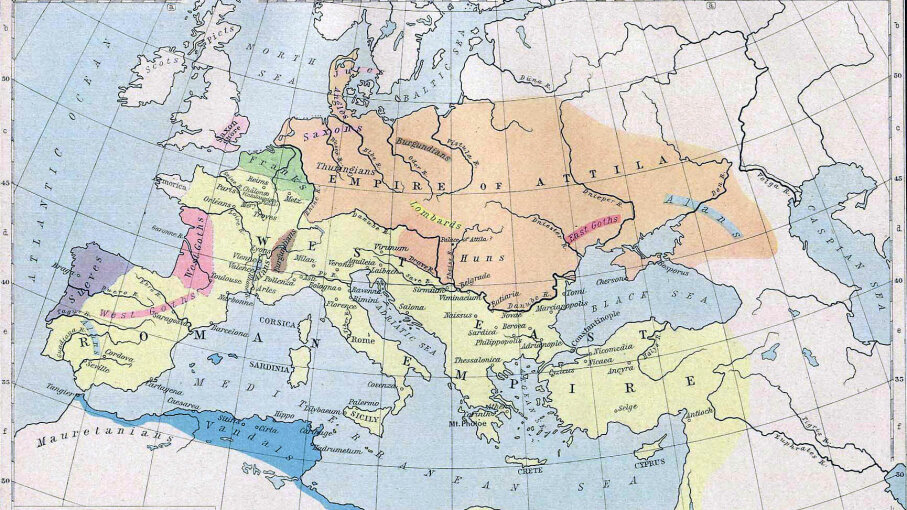 This map shows the size of the Hunnic Empire at its peak. Wikimedia Commons

When Attila and Bleda took over rule of the Huns in 434, they finished a peace treaty their uncles had been arranging with Theodosius II, head of the Eastern Roman Empire. In addition to Theodosius II turning over some renegade Huns who had escaped, he agreed to pay the Huns 700 pounds (317 kilograms) of gold as an annual tribute, among other terms, to keep the Huns at bay [source: New World Encyclopedia].

The next few years were peaceful in the Roman Empire, as the Huns were off trying to invade the Persian Empire. They didn't succeed, however, which may be why Attila suddenly cried out that the Romans had broken their treaty, leading the Huns to begin attacking cities in the Eastern Roman Empire once again in 441. Barreling through the territory, they came to within 20 miles (32 kilometers) of the capital, Constantinople, when Theodosius II once again bartered with the men to stop their attacks. This time the cost was a staggering 2,100 pounds (952 kilograms) of gold per year [sources: Pruitt, New World Encyclopedia].

Back in their home in the Great Hungarian Plain, the Huns lived reasonably peacefully until 445, when Attila is said to have slain his brother, Bleda, to become sole leader of the Huns. A few years after that, he again battled the Romans, rolling through today's Balkans and into Greece. Once again the Romans couldn't best the Huns, begged for a cease-fire and agreed to even harsher penalties and peacekeeping terms.

Attila's first and only battlefield loss came in 451, when roughly 200,000 Hun soldiers invaded Gaul (France). At first they fared well, per usual, easily devastating all they came across. But the Romans sprang to action under General Flavius Aetius, who formed an alliance with Visigothic King Theodoric I. In a blowout battle on the Catalaunian Plains (eastern France), the Roman-Goth army defeated the Huns. King Theodoric I was killed during the bloody battle, while Attila simply withdrew his men and left Gaul.

Italy was next on Attila's agenda. He and his troops drove down into the territory in 452, destroying many cities. But the country was suffering a famine and there was much disease, both of which also affected the Huns. They decided to head for home, leaving Rome -- the main prize -- intact. The following year, Attila died. It was a very odd death which we'll explore next. 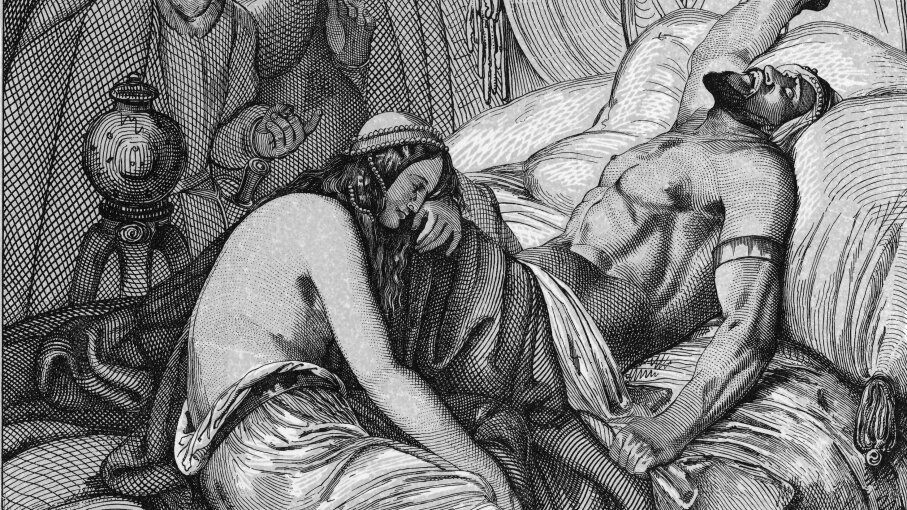 The body of Attila the Hun lies on a bed while his wife of one night, Ildico, weeps at his feet. Kean Collection/Getty Images

Attila, like any good barbarian in ancient times, had many wives and children, although no one knows how many. He also once received an interesting marriage proposal. Sort of.

It was the spring of 450 when Attila received an engagement ring from Honoria. Honoria was the sister of Valentinian III, emperor of Western Rome. Valentinian III was trying to arrange a marriage for Honoria, but she didn't want to marry the aristocrat he had in mind. So, she sent her engagement ring to Attila, asking him to help her avoid her scheduled nuptials. Attila either thought she was hinting that she wanted to escape by marrying him instead, or he may have pretended that's what he thought. Either way, upon receiving the ring he proclaimed Honoria would soon become his newest wife, and demanded half of the Western Empire as her dowry.

Naturally, Valentinian III was furious with Honoria. She denied she was trying to marry Attila, and eventually agreed to marry the aristocrat. Meanwhile, Attila invaded Italy in 452, claiming the reason was to find Honoria and make her his wife. But apparently he was easily distracted from this mission, because in 453 he married the young, beautiful Ildico. On their wedding night, he ate and drank a lot more than usual. The next morning Ildico found Attila dead in their marital bed. The cause? Attila, prone to nosebleeds, apparently suffered one in his sleep (or drunken stupor) and choked to death on his own blood.

Not surprisingly, some later claimed Attila was murdered by Ildico; others said his death was part of some larger conspiracy involving Marcian, then head of the Eastern Roman Empire. No matter. Following his death, the Hun horsemen cut their long hair and smeared blood over their faces, then rode slowly around Attila's tent. Later, they placed Attila's body in a gold-covered coffin that was set inside a silver coffin that was set inside an iron one. According to legend, a river in an undisclosed place was diverted, and Attila was buried in the riverbed, after which the waters were released to flow back over his burial place, effectively hiding it from his enemies. The servants who performed the burial were subsequently slain to ensure no one would find his remains. And so far, nearly 1,600 years later, no one has [sources: Pruitt, Mark].

Fables and Legends About Attila 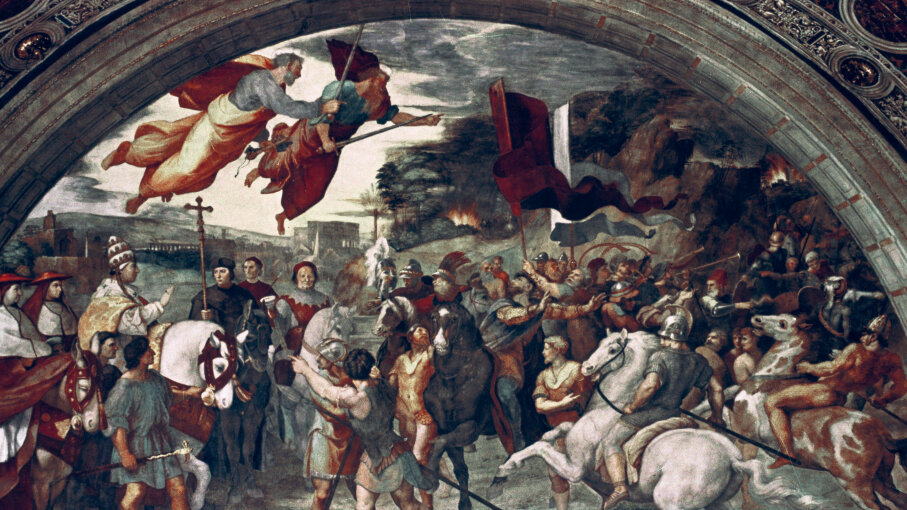 When you're notoriously famous, stories begin circulating about you, both true and false. There are several legends associated with Attila the Hun. Perhaps the most dramatic involves his incursion into Italy in 452. According to the famous tale, when Attila and his troops entered Italy, Valentinian III, the Western Roman Emperor, fled to Rome. That gave the Huns free reign to loot and destroy at will.

But the Huns were so destructive, Pope Leo I traveled up from Rome to confront the aggressor. He told Attila he was not welcome in Italy, making a great show of his bravery, and noted his personal hotline to God. Then, a miracle occurred. Saints Peter and Paul appeared before Attila and told him he must obey Pope Leo I or he would die. Attila agreed and quickly left the country. No written records exist about Attila's encounter with Pope Leo I. But a more likely occurrence is that after meeting with the pope, Attila decided to call off the invasion because his supplies were running low and his troops were falling ill from the disease ravaging the country. He was also probably concerned he was more needed back at home, where the Eastern Roman Empire had recently launched at offensive into Hun territory.

The fable about Pope Leo I confronting Attila with Saints Peter and Paul at his side is interesting because little is known about Attila's religious beliefs, or lack thereof. Whether or not he was a Christian, there is some evidence Attila may have believed in prophecies. One story about the Hun relates how a shepherd once discovered one of his animals limping and bleeding. Searching for the cause, the shepherd found a finely crafted sword lying in the field. The shepherd brought the sword to Attila, who believed it was a sign that he was ruler of the world, and was given the blessing to fight at will. Attila claimed this sword once belonged to Mars, the Roman god of war, which struck fear in the hearts of many.

Attila enjoyed his nefarious reputation. He fueled it by adopting a fierce gaze said to make people quake, and famously said, "There, where I have passed, the grass will never grow again." Partly because of this, ancient artists drew Attila as an unsightly creature with devil's horns and a goatish beard.

In more recent times, the names "Attila" and "Huns" continue to evoke savagery. During World War I, the British insultingly compared the German army to the Huns because of the soldiers' brutality. The comparison was also likely due to the fact that the German Kaiser sent troops to China in 1900 to squash the Boxer Rebellion, telling the men to fight like Huns [sources: History, Biography, Dash].

Every time I hear about the Huns, I think of the Disney flick "Mulan" and its catchy song "I'll Make a Man Out of You." The tune includes the opening line, "Let's get down to business, to defeat the Huns." And then I always think, "Who were the Huns anyway?!" Because I didn't know much about them, or Attila, it was fun to research and write this piece.

Another enjoyable part of this assignment was that during my research I came across some info that said the name "Attila" remains popular in central-eastern Europe (namely Hungary) and in Turkey. Interesting, as I was once friends with a foreign exchange student from Turkey named Attila. I found him on Facebook a few years ago, too. How many of you have a friend named Attila?!