Barack Obama and the Presidential Nomination 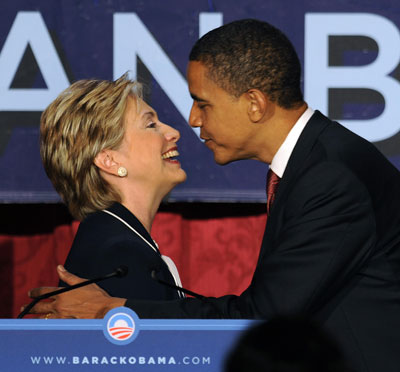 Foes no more: After Obama clinched the Democratic nomination in June 2008, Clinton withdrew from the race and gave her support to him. Here they're shown at a Women for Obama fundraiser in July 2008.
Timothy A. Clary/AFP/Getty Images

On Tuesday, June 3, 2008, Sen. Barack Obama became the first black American to claim the presidential nomination for any party. Despite a strong showing by Clinton toward the end of the primaries, Obama won the requisite 2,118 delegates (including superdelegates) needed for the nomination from votes in Montana and South Dakota -- the last two states to hold primaries.

On June 7, 2008, Sen. Hillary Clinton withdrew herself from the candidacy for the 2008 Democratic nomination for the presidency. While she threw her support behind her former rival, some Clinton supporters had already decided they wouldn't support Obama. A CBS News poll found that 22 percent of Clinton supporters said they planned to vote for McCain after Clinton's withdrawal from the race [source: CBS News].

Although yet to be officially bestowed with the nomination at the Democratic National Convention in August, Obama became the presumptive presidential candidate. His rival became presumptive Republican nominee, Sen. John McCain. Shots were fired from both campaigns across the other's bow. The Obama campaign criticized McCain as an extension of the Bush/Cheney administration [source: Los Angeles Times]. McCain's camp found criticism in a series of gaffes associated with the Obama campaign.

The bad publicity began with Obama's former pastor, Rev. Jeremiah Wright. While Obama's religious beliefs were questioned throughout his candidacy -- including whether he is Muslim -- his former pastor brought real controversy to the campaign. Video of an arguably anti-American speech made by Wright decrying mistreatment of blacks at the hands of the white establishment was picked up by news sources. "The government gives them the drugs," Wright told a crowd during a sermon, "builds bigger prisons, passes a three-strike law and then wants us to sing 'God Bless America.' No, no, no, God damn America…" [source: ABC News]. Obama responded with a 40-minute speech discussing the "racial stalemate" and "chasm of misunderstanding that exists between the races" in America [source: The Telegraph]. The speech caused observers to draw parallels between Obama and Martin Luther King, Jr. [source: NY Daily News].

Race emerged at least twice more during Obama's campaign. In July 2008, civil rights leader Rev. Jesse Jackson was caught on a live microphone during a commercial break on Fox & Friends, a news program on which Jackson was a guest. "I want to cut his nuts off," said Jackson of Obama, for "speaking down to black people". And the McCain camp accused Obama of playing the "race card" after he warned voters that the Republicans would try to lure them away using scare tactics: "You know. He doesn't look like all those other presidents on those dollar bills, you know. He's risky." Rick Davis, Sen. McCain's campaign manager, called the speech "divisive, negative, shameful and wrong".

Despite these setbacks, Obama remained competitive in polls with McCain. A June 6 CNN poll found Obama leading McCain 49 to 46 percent. With an Obama-Clinton ticket versus a McCain-Mitt Romney ticket, the results rose to 52 to 46 percent. Polls in early July 2008 found similar results.

Obama took a much-publicized tour of the Middle East and Europe in July 2008. While still a presumptive candidate, the senator met privately with Iraqi Prime Minister Nouri al-Maliki [source: NPR]. In Berlin, Obama gave a speech that drew parallels to President John F. Kennedy's famous 1963 "Ich bin ein Berliner" and President Ronald Reagan's "Tear down this wall" speeches. Kennedy and Reagan, each a sitting president at the time of their speeches in Berlin, drew crowds of nearly 100,000 and 20,000, respectively [source: Bozell]. While still a candidate, Obama gave his speech in Berlin to an estimated 200,000 [source: Rose].

On August 22, 2008, Obama announced he’d selected Delaware senator Joe Biden as his running mate. Sen. Biden had been a rival of Obama’s during the 2008 primaries, but had dropped out in the beginning of January 2008 after a poor showing in the Iowa Caucus. This was Biden’s second run for the White House, the first coming in 1988. He dropped out amid accusations of plagiarism in a speech he gave [source: MSNBC]. Obama said he selected Biden because he was “a statesman with sound judgment who doesn’t have to hide behind bluster to keep America strong” [source: NPR].

Obama selected Biden over Hillary Clinton, who many Democrats had hoped would end up as Obama’s running mate. Republicans also pointed out that Biden was a vocal critic of Obama’s lack of experience in foreign policy [source: MSNBC]. Biden served in the senate for more than 30 years, and was known for his “blue-collar roots, generally liberal voting record and a reputation as a long-winded orator” [source: AP].

With his vice president chosen, Obama turned his attention to the three presidential debates versus Sen. John McCain. Poll results showed that Sen. Obama won all three debates against his GOP rival; 51, 54 and 58 percent of respondents believing Obama came out on top in the three debates in CNN polls [source: CNN].

By mid-October, he had enough voters responding they planned on voting for him -- including in some swing states that traditionally go Republican, like Virginia -- that the estimated tally of those votes would be enough to satisfy the 270 electoral votes needed to carry him into the White House.

The gulf between polls and actual votes is a wide one, however and Democrats continued to hold their breaths until Nov. 4.

For more information on the presidential race and other related topics, visit the next page.