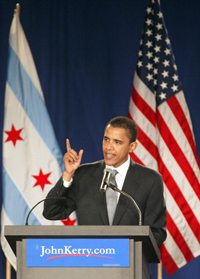 Obama began his political career as an Illinois state senator, where he served from 1997 to 2004. He became known among Chicago political circles for using hardball political tactics. A Chicago Tribune article reported that he was able to get into the Illinois Senate by challenging the veracity of nominating petitions until his competitors could no longer legally be considered candidates and were knocked off the ballot.

There in office, he served the south side of Chicago, casting more than 4,000 votes [source: Los Angeles Times], including some on bills that required homicide interrogations be recorded, reformation of campaign finance, allocation of tax credits for the poor and elimination of racial profiling [source: New York Times].

He also spoke out against the U.S. invasion of Iraq, a claim that was called into question during the 2008 presidential nomination race. Obama's claim was backed up, however, by the publication on his official candidate's site of his speech at an anti-war rally in October 2002. Rather than fighting Iraq, Obama said, "Let's finish the fight with Bin Laden and Al Qaeda, through effective, coordinated intelligence, and a shutting down of the financial networks that support terrorism, and a homeland security program that involves more than color-coded warnings."

As a senator in the Illinois legislature, Obama had a third option beyond "Yes" or "No" -- "Present." This option allows a legislator to remain neutral on an issue at vote, side-stepping a stance. Obama was criticized by his campaign rival Sen. Hillary Clinton's campaign for the 129 "Present" votes he made from 1997 to 2004. In 1999, he voted present on a bill that allowed juvenile offenders who committed certain crimes to be tried as adults. The results of this vote and others, including votes on abortion, allowed Clinton's campaign "to portray Mr. Obama as a 'talker' rather than a 'doer'" [source: The New York Times].

Obama made the jump from the state senate to U.S. Senator for Illinois when he was elected to Congress in 2004. Since then he has served on several Senate committees: Foreign Relations; Health, Education, Labor and Pensions; Homeland Security and Government Affairs; Permanent Subcommittee on Investigations; Veterans' Affairs; Subcommittee on Federal Financial Management, Government Information, Federal Services and International Security; and Subcommittee on State, Local and Private Sector Preparedness and Integration [source: Project Vote Smart].

Obama has introduced several bills in the Senate. He sponsored the Transparency and Integrity in Earmarks Act in 2006 (S. 2261), which aimed to require that earmarks (also called "pork") attached to bills be more explicitly detailed. Obama also co-sponsored a bill to increase the child tax credit for low-income and working families (S. 218) in 2007. He introduced the Global Poverty Act of 2007 (S. 2433), which would require the President to create a strategy to fight global poverty. He introduced a total of 133 bills between Jan. 4, 2005, and Aug. 2008; 119 didn't make it out of committee review, earning him an "Average" rating by comparison to other senators [source: GovTrack].

In the Senate in 2007, Obama voted along Democratic Party lines 97 percent of the time, about 10 percent more than the average for all Democratic senators [source: The Hill]. Of the leading Democrat candidates, he's missed the most votes during the 109th Congress. Obama missed 282 of the 630 total votes from Dec. 8, 2007, to July 28, 2008, or 44.8 percent. Obama ranks third in votes missed behind fellow presidential candidate Sen. John McCain (R-AZ) and Sen. Tim Johnson (D-ND) who suffered a brain hemorrhage and missed the 2007 Senate session [source: Washington Post].