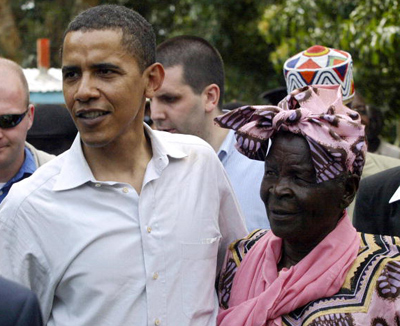 The League of Conservation Voters awarded Obama a grade of 100 percent on seven votes it considers key to environmental policy (such as public health, energy and funding) in its 2006 National Environmental Scorecard. He received an 80 percent grade for his votes in the 110th Congress. He received an "A" grade from the Genocide Intervention Network on his 2007 voting record related to seven key votes on issues relating to the genocide in Darfur, Sudan. He received a "C," an "A+," and an "88 percent" for votes considered "supportive of the middle class" for his voting record in 2005, 2007 and 2008, respectively from the progressive think tank Drum Major Institute's TheMiddleClass.org.

Labor unions tend to favor Obama's record more than business organizations do. The National Federation of Independent Businesses gave Obama a 12 percent grade for his voting in the 109th Congress on issues like minimum wage, employee health insurance and the Death Tax. He received a grade of 100 percent from the AFL-CIO labor federation [source: San Jose Business Journal]. His voting record in 2006 regarding votes considered key by the United States Chamber of Commerce -- including port security, immigration and the Death Tax -- received a 55 percent grade by that organization. He received a score of 94 percent for his voting record in the 109th Congress on issues like funding for avian flu vaccine, immigration reform and voting rights from the health care-related Service Employees International Union; for the 110th Congress, Obama received a score of 74 percent after missing three votes considered key by that organization -- a health care funding bill, access to jobs for Americans and a bill on children's health care.

The conservative John Birch Society gave Obama a score of 0 percent for his votes in the 110th Congress on Constitutional issues, including embryonic stem cell research, the expansion of anti-hate crime programs and troop withdrawal from Iraq. A joint scorecard compiled by the conservative family values organizations Focus on the Family and the Family Research Council gave Obama a 0 percent score for his votes on issues like embryonic stem cell research, exemption of grassroots organizations from lobbying reform and SCHIP health care insurance for unborn children [source: FRC Action].

On the other side, he received a 75 percent from the liberal Americans for Democratic Action in 2007 for issues like the minimum wage increase, immigration reform, FISA and the troop surge in Iraq. Obama received a 100 percent grade for his voting record on key issues of concern from Planned Parenthood -- sex education, health care for low-income families and comprehensive family planning. He received an 83 percent grade on civil liberty issues -- voting ID requirements, torture, and a gay marriage amendment -- from the American Civil Liberties Union for his record in the 109th Congress.

Read about how Obama voted on some key issues on the next page.