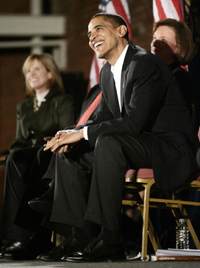 Obama at a rally in New Hampshire during the 2008 primary season.
Stan Honda/AFP/Getty Images

Celebrity and elite benefits the candidate's campaign finances at the beginning of the primary race, as well as after the candidate clinched the nomination. On Feb. 20, 2007, a fundraiser was hosted in Los Angeles for Obama by DreamWorks Studio heads Steven Spielberg, Jeffrey Katzenberg and David Geffen. Tickets were $2,300 per person, and the evening netted the campaign an estimated $1.3 million [source: AP]. Another Hollywood-based fundraiser, held in September 2007 by Oprah Winfrey also sold tickets for $2,300 per person (this is the maximum amount an individual can contribute to a campaign by law). This fundraiser raised around $3 million for the Obama presidential campaign [source: AFP].

It turned out that most of Obama's coffers were ultimately filled by everyday donors. A Cincinnati fundraiser, hosted by Ohio state senator Eric Kearney on Feb. 26, 2007, attracted 1,000 supporters and generated between $350,000 and $500,000. The host was quoted as saying he was impressed by "how diverse a crowd it was -- whites, blacks, Latinos, Asian folks, rich and poor" [source: Cincinnati Enquirer].

In October 2007, his campaign announced that it had attracted 93,000 new donors contributing $19 million in the third quarter of that year. The total fundraising for the campaign reached $74.9 million for the primaries alone, with contributions from 352,000 donors [source: Barack Obama.com]. By the end of the year, the total donations from October to Dec. 31 came to an additional $23.5 million. From Jan. 1 to Jan. 8, 2008, Obama's campaign raised $8 million [source: The Washington Post]. Throughout the month of January 2008, Obama's campaign raised $32 million, the most raised by any candidate in the 2008 primary race to that point. The following month, Obama broke Sen. John Kerry's 2004 single-month fundraising record in February 2008 after generating $55 million in donations, $20 million more than his Democratic rival Sen. Hillary Clinton drew for the same month [source: Los Angeles Times].

"We continue to build a grassroots movement that makes us best-positioned to compete financially in the primaries and caucuses coming up," wrote campaign manager David Plouffe. Much of this is generated through online contributions. From midnight of Jan. 9 to the following morning, the Obama campaign received $500,000 online alone [source: The Washington Post]. From the beginning of his candidacy for the Democratic nomination in January 2007 to April 2008, Obama raised $266 million [source: CNN].

Obama also has the support of industry, although some sectors more than others. He ranks at or near the top of contributions received from the pharmaceutical, entertainment, banking, computer, health care, investment and Internet industries. Obama also does well with donors from retirement associations, securities and investments outfits, education organizations and law firms. He ranks near the bottom of contributions received from lobbying organizations, oil companies and the tobacco industry [source: Open Secrets.org].

Obama's campaign took a PR hit when one of his supporters, Chicago-area developer Tony Rezko, was arrested on Jan. 28, 2008, on federal charges of conspiracy, influence peddling and demanding kickbacks. The candidate told reporters that he planned on ridding his campaign of $80,000 contributed by Rezko. Obama had worked for nonprofit groups that had ties with Rezko's development company and worked five to seven hours directly for Rezko's firm [source: Chicago Tribune]; the developer had contributed and helped raise about $120,000 for Obama's 2004 Senate campaign; and Obama as senator wrote two letters supporting a Rezko venture. The senator reportedly gave away or returned $44,000 of contributions from Rezko and promised another $40,350 would be donated to charities.

The Rezko scandal didn't go away so easily. A deal involving a house that Obama and his family purchased in Chicago in 2005 has come into question. The seller is reported to have wanted to sell two adjacent properties at once. The Obamas purchased one as their home for approximately $300,000 below the asking price. Rezko's wife, Rita, purchased the other house at the asking price. Later, the Rezkos sold a strip of land belonging to the second property to the Obamas. There is no mention of Obama in any of the federal charges filed against Rezko.

Obama's and rival campaigns got creative during the 2008 primary race by extending their reach across the Atlantic and mining a previously neglected source of campaign contributions: expatriates -- Americans living abroad. Obama's wife, Michelle, hosted a fundraiser in London in October 2007. Unsolicited contributions from expatriates also came in. By Sept.18, 2007, Obama's campaign had raised $222,000 from Americans living overseas, compared to $26,430 for rival Edwards and $10,950 for Clinton.

In June 2008, Obama drew criticism from the McCain campaign after he announced he would opt out of public financing for his presidential bid. Obama said in February 2008 that he would consider taking public financing for his campaign, which would both guarantee and limit his finances to about $85 million. Sen. Hillary Clinton withdrew from the Democratic candidacy and threw her support behind Obama, leaving his campaign to face the prospect of raising $200 million for the general election. Obama turned to wealthy supporters again as well as former Clinton donors [source: The New York Times].

With Clinton officially suspending her campaign and throwing her weight behind him, Barack Obama became the presumptive Democratic nominee. Read about presidential candidate Obama on the next page.