The Evolving Office of First Lady 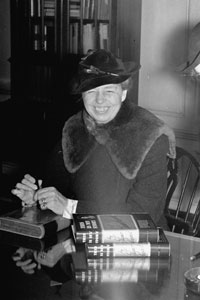 Eleanor Roosevelt was one of the most active first ladies in the history of the United States. Here, she autographs copies of her book "This Is My Story."
Peter Stackpole//Time Life Pictures/Getty Images

When Martha Washington became first lady, the White House hadn't yet been built. In the 21st century, the private residence is in full swing -- and it even boasts a beauty salon that Pat Nixon installed and Nancy Reagan later refurbished. Aside from first lady coiffures, a lot about the office has changed over the years.

As presidential approval ratings have indicated since their advent during the Franklin Delano Roosevelt administration, the nation is a tough critic of its elected leader [source: Roper Center]. That's fair enough, but public approval of the first lady is a stickier topic, as we'll see next.