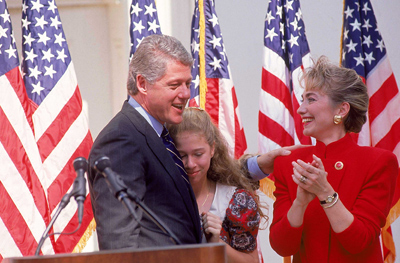 Hillary Clinton as the First Lady of Arkansas in 1991, as her husband announces his candidacy for president.
Cynthia Johnson/Time Life Pictures/Getty Images

Hillary Diane Rodham was born on Oct. 26, 1947, to Dorothy and Hugh Rodham of Park Ridge, Ill. As a girl, she was a Brownie and a Girl Scout in the Chicago suburb. Her political outlook was shaped by her father, a Republican [source: Hillary Clinton]. Her career in politics began through the law. She attended Wellesley College in Massachusetts, serving as the president of the College Republicans there. Clinton graduated in 1969 with honors and a B.A. in political science [source: Hillary Rodham Clinton].

That same year, she entered Yale Law School and served on the board of editors for the Yale Law Review and Social Action, a quarterly student-run publication. At Yale, Hillary Rodham met Bill Clinton. Following graduation, he returned home to Arkansas to pursue a career in politics; Hillary stayed in Massachusetts to work as an attorney for the Children's Defense Fund [source: CDF]. She also served as one of only two female attorneys to the congressional committee that investigated the possibility of impeaching President Richard Nixon [source: Hillary Clinton].

During her time in Arkansas, Clinton continued to work as a lawyer. She was a partner in the Rose law firm, was twice named one of America's 100 most influential attorneys and was appointed by President Jimmy Carter to the board of the U.S. Legal Services Corporation, which provides funding for indigent legal services [source: Hillary Clinton].

In 1992 and 1996, Bill Clinton made successful bids for the presidency. In the White House, "Hillary Clinton quickly established herself as the most powerful and controversial first lady in history," writes Linda Feldmann in the Christian Science Monitor [source: CSM]. She doggedly pursued a campaign to provide universal health coverage for all Americans, serving as ambassador for the proposal, visiting lawmakers in an attempt to get members of the House and Senate on board. Despite her best efforts, writes the Associated Press' Beth Fouhy, the plan proved to be "an audacious effort that collapsed under its own complexity, Republican opposition and the Clintons' unwillingness to seek compromise with lawmakers" [source: ­AP].

While in residence at the White House, the Clintons weathered a succession of scandals together, the most famous being the Monica Lewinsky affair. When reports came out that her husband had received oral sex from the White House intern, Mrs. Clinton called the allegations untrue, suggesting on NBC's "Today Show" that they were an invention of a "vast right-wing conspiracy" that sought to remove Clinton as president [source: Washington Post].

President Clinton eventually admitted to the affair when he was questioned by a grand jury. Mrs. Clinton later wrote in her 2003 memoir, "I was dumbfounded, heartbroken and enraged that I'd believed him at all." As years passed, however, she chose to forgive her husband. "Over time we both began to relax" [source: New York Times].

Fresh out of the White House, Hillary Clinton became a senator for New York. Read about her political career on the next page.