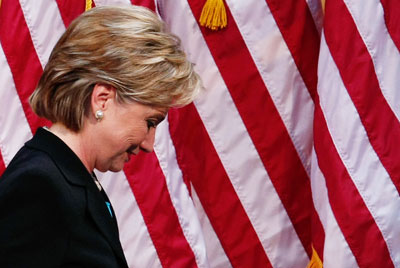 Like her fellow candidates, Clinton endured her fair share of controversy during the 2008 primary race. The Clinton and Obama campaigns were locked in a battle over experience in March 2008. Clinton's campaign suggested Obama had little to none, as he'd been a senator for less than four years when he threw his hat in the ring for the presidency. Obama's campaign countered with insinuations Clinton's experience in foreign affairs amounted to no more than the usual first lady responsibilities of good will tours; that she held the traditional role of supportive, but excluded, figurehead during her husband's tenure as president.

Clinton responded by citing a 1996 visit to Bosnia as first lady, where a reception ceremony on the tarmac was cancelled due to snipers in the area. Clinton recounted she and her daughter "ran with our heads down" across the tarmac to safety. The claim was quickly (and very publicly countered) after CBS footage of the trip surfaced. The footage clearly contradicted Clinton's story, showing her and her daughter receiving a warm and calm reception on the tarmac [source: CNN]. Even worse, she was shown surrounded by small children, hardly a sign that the Air Force base she flew into was under the threat of attack by snipers.

Clinton survived the PR nightmare that followed, and actually began to gain in the polls. The Democratic primary race had been narrowed down to her and Obama after Sen. John Edwards dropped out on Jan. 30 [source: Daily Mail]. As Super Tuesday arrived on February 5, two major polls showed Clinton and Obama tied (41 percent), or Clinton with a lead over her rival (49 to 46 percent) [source: The Guardian]. With more than 1,600 of the 2,118 delegates needed to clinch the nomination up for grabs on one day, Super Tuesday could have done what it was designed to do: produce a clear front-runner. Instead, the two Democratic candidates virtually split the delegates on Super Tuesday.

The race continued, with Clinton and Obama generally neck-to-neck. By the end of March, the race remained so close that as an April Fool's Day joke Clinton challenged Obama to a winner-take-all bowling match for the nomination [source: AP]. As is almost never seen, the votes in the states at the end of the primary calendar became vitally important. Ultimately, Obama was the first to clinch enough delegate votes, from the last two primaries, held in Montana and South Dakota. Clinton, however, won more delegates in six of the last 10 primaries held and split one state evenly with Obama [source: Real Clear Politics]. This was enough for the Clinton camp to revisit an issue that remained contentious throughout the primaries: the votes of Michigan and Florida.

The two states had their delegates stripped after violating party rules by scheduling their primaries ahead of the earliest approved date. Clinton was the only Democratic contender listed on the ballots in the states, and as such, if the delegates were given back convention voting rights, it was possible the two states could push her over the top to clinch the nomination. As Obama rolled on, however, Clinton dropped the issue and withdrew from the race on June 7.

After she withdrew from the Democratic race, Clinton threw her full support behind her former rival. On June 28, she and Obama spoke together publicly in Unity, N.H. An almost celestial coincidence had transpired in the aptly-named town the previous February, with the two candidates evenly splitting 214 votes during a primary vote. The Democrats' campaigns chose the town as the setting for Clinton to unify her support behind Obama. She urged the citizens of Unity and all who'd voted for her in the primaries to cast their ballots for Obama in November: "We are one party; we are one America," she proclaimed [source: Hillary Clinton].

For more information on elections, politics and other related topics, visit the next page.