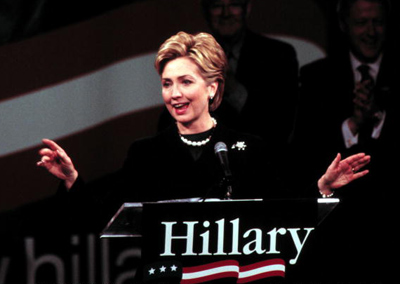 After spending eight years in Washington, Hillary and Bill Clinton moved to Chappaqua, N.Y., in early 2000. The move came toward the end of a seven-month long "listening tour" Hillary conducted around New York state. Although it was largely seen as the beginning of a bid for public office, Clinton refused to confirm this. On Feb. 6, 2000, she announced she would run for the Senate seat left open by retiring Sen. Daniel Patrick Moynihan. CNN said the announcement ended the "one of the worst-kept secrets in national politics" [source: CNN]. Clinton won her bid and on Nov. 7, 2000, became the first former first lady to be elected to office [source: Clinton.Senate].

Her quest for the Senate was met with some skepticism, but Clinton was able to win over voters. "After she became a senator, Republicans who might as well have greeted her with crucifixes and garlic and silver bullets learned they could work with her and, grudgingly, learned to respect her," writes pundit Tony Sachs [source: The Huffington Post].

Her constituency apparently did as well. In the 2000 election, New York City's firefighters supported Clinton's Republican rival for the Senate seat. Six years later, the firefighters publicly endorsed Clinton before any Republican threw his or her hat in the ring [source: New York Times].

Clinton won re-election in 2006, garnering more than 67 percent of the popular vote in her state [source: New York Times]. As of November 2007, she enjoyed a 60 percent job approval rating [source: Survey USA]. On Feb. 14, 2008, the Washington Post reported that Clinton was among the top 10 senators for securing federal funds for her home state, generating more than $342 million in earmarks for New York [source: Taxpayers for Common Sense].

In the Senate, Clinton became a staunch opponent of the Iraq War. She voted in 2002 in favor of the initial invasion; later she explained, "Knowing what I know now, I would never have voted for it," [source: Salon]. She later cast votes against the war, including against a troop surge and in favor of calls to withdraw troops.

She has championed a wide variety of causes in the Senate. Clinton has worked to expand access to family planning and contraceptives and support unwanted pregnancy prevention through education [source: New York Times]. When news leaked that a popular video game contained sex scenes, Clinton co-sponsored the Family Entertainment Protection Act, which called for stricter rating guidelines and better enforcement of existing guidelines [source: U.S. Senate]. In March 2007, Clinton introduced the Count Every Vote Act in the Senate, which would require voter verified paper copies of electronic votes be used as the standard in a recount and tighten guidelines on electronic voting machine security [source: Clinton.Senate].

In the Senate, Clinton has voted along Democrat Party lines 97.2 percent of the time. She missed 206 votes (32.3 percent) cast in the 110th Congress [source: Washington Post].

Find out about what some special interest groups think about her votes in Congress on the next page.