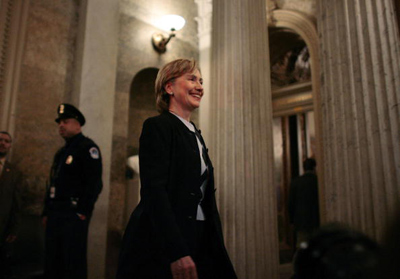 Hillary Clinton leaves the Senate after voting on confirmation of Samuel Alito to the Supreme Court in January 2006.
Chip Somodevilla/Getty Images

The American Conservative Union gave Clinton a lifetime score of 9 percent in Congress. She received an 8 percent in 2006 for immigration reform, same-sex marriage amendment and earmark disclosure. She received a 12 percent for her votes in 2005 and a score of 0 percent in the 108th Congress on issues such as required state seat belt use enforcement, liability for gun manufacturers and a ban on certain assault rifles.

The fiscally conservative National Taxpayers Union (NTU) gives Clinton an "F" (9 percent), making her a "Big Spender" for her votes in 2005. The NTU includes every vote cast throughout the year that has any impact on government spending, debt, appropriations and other federal finances. In fact, she received all "F"s from the group: 11 percent in 2004, 21 percent in 2003, and 17 percent in 2002.

The conservative family values groups the Family Research Council and Focus on the Family gave Clinton a grade of 0 percent for her votes in the 110th Congress [source: FRC/FotF]. She missed two of the seven key votes and voted against the groups' opinions on the other five. Issues included expanding the definition of hate crimes to include those based on sexual orientation and federal support for embryonic stem cell research.

The gay, lesbian and transgender rights group the Human Rights Campaign (HRC) gives Clinton a score of 89 percent for her votes in the 109th Congress on issues like sexual orientation in hate crimes and extending Medicaid coverage to include HIV treatment. In the 108th Congress, Clinton received a score of 88 percent, and in the 107th Congress, the HRC gave Clinton a 100 percent score for votes on the confirmation of Attorney General John Ashcroft and enforcement of the Boy Scouts to reinstate gay leaders.

Read about how Clinton voted on a wide variety of key issues on the following pages.