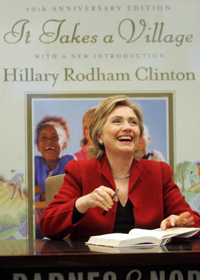 Sen. Clinton, shown at a signing for her book, "It Takes a Village," in December 2006.
Mario Tama/Getty Images

Read about Clinton's votes on environmental issues and matters of law and governance on the next page.