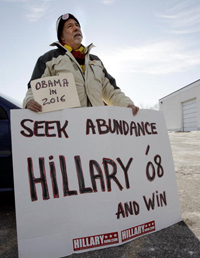 Clinton has shaped her 2008 campaign message to include her experience, saying she would be "ready to lead from day one." This voter in New Hampshire in December 2006 appears to agree.
Stan Honda/AFP/Getty Images

When she appeared on "Late Night with David Letterman" on Aug. 30, 2007, Clinton facetiously delivered her Top 10 Campaign Promises. Under provisions laid out in No. 8, if Clinton is elected president, Americans will "have the option of rolling the dice against the IRS for double or nothing on your taxes" [source: CBS News].

For the centerpiece of her environmental platform, Clinton chose the Global Warming Pollution Reduction Act of 2007. This proposed bill called for the reduction of U.S. emissions of greenhouse gases to 80 percent less than 1990 levels by 2050. The bill "was the most forward leaning in terms of what needs to be done to deal with the threat of global warming," Clinton said in an interview with Amanda Griscom Little. Clinton also told Little she intended to strip oil companies of their tax breaks [source: Salon].

As first lady, Clinton was focused on health care. This focus didn't appear to have shifted during the campaign. Her American Health Choices Plan, described on her official site, called for guaranteeing health care coverage for all Americans. Those already insured could opt to keep their current plan, take part in the same private coverage offered to Congress, or take advantage of public coverage similar to Medicare. Clinton proposed granting tax credits for families to purchase coverage, rewarding businesses who provide coverage and rolling back the Bush tax breaks for wealthy Americans.

Clinton's platform also included a national pre-kindergarten program with federal funding going to states to help establish programs or support already established ones. Further expansion included hiring more teachers, raising salaries, increasing Pell grants and creating tax credits as high as $3,500 for parents of students in higher education. College would be made even more appealing with her plan to implement a monetary reward system for college graduates who give a year of public service following graduation. She has also said her administration would invest $1 billion in programs that will reduce the number of minority dropouts by half [source: Boston Herald].

On Iraq, Clinton has proposed a troop drawdown within 60 days of her inauguration as president [source: New York Times]. It's necessary, she said, to leave some troops behind for counterterrorism, to thwart Iran from moving into Iraq, and protect ethnic Kurds. If the withdrawal of troops plunged the country into sectarian violence, Clinton said she would not allow U.S. forces to intervene [source: New York Times].

Clinton favored immigration reform, opting for both secure borders and humane treatment of illegal aliens already living in the United States. "Of course we're going to have secure borders," she said in El Paso, Texas, in February 2008, but also addressed her view that there's a need to "bring people out of the shadows" [source: ABC News]. The balance will be struck, Clinton envisioned, by providing illegal immigrants with a path to citizenship along with new laws governing enforcement against future illegal immigrants, beefing up border patrol and the technology they use [source: Clinton.Senate].

The 2008 campaign became the most expensive one in history. Throughout, Clinton was able to raise as much money as needed, breaking some records for campaign fundraising. Read about her fundraising capabilities on the next page.