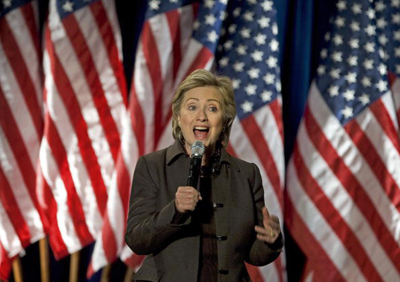 Hillary Clinton at a fundraiser for her 2008 campaign called "Holidays with Hillary" in December 2007. The event raised over $1 million in one night.
Paul J. Richards/AFP/Getty Images

Toward the beginning of 2007, Clinton turned to some heavy-hitting fundraisers to help fill her campaign coffers. She held a dinner on Feb. 6 for about 70 studio investors, lawyers, venture capitalists and other members of the high-finance world. Each guest agreed to raise $250,000 and some as much as $1 million. The guests also agreed to drum up $50,000 each by the end of February to help bulk up Clinton's campaign fund [source: Washington Post].

Her tactic worked. By the following April, her campaign broke the record for the most raised by a presidential campaign during that particular quarter. She was able to generate $26 million in just three months, which was almost three times as much as the previous record of $8.9 million, set by Vice President Al Gore in 1999 [source: Washington Post].

September 2007 was a rough month for Clinton's fundraising strategy. That month, the senator faced criticism for holding a fundraiser in Washington, where she was accused of using her position as a senator to bring other lawmakers to a luncheon hosted by a lobbying law firm. Tickets were $1,000 or $2,300 and gave lobbyists access to legislators [source: AP].

Also that month, Clinton returned at least $850,000 in campaign contributions to 260 donors. The money had been bundled by Clinton fundraiser Norman Hsu, who was arrested in September 2007 for evading authorities after being convicted on investment fraud charges. Hsu had defrauded investors of over $1 million, was found guilty in 1992, and a warrant was issued for his arrest after he failed to show up for sentencing. Clinton's campaign told media that they had done a background check on Hsu (standard procedure) before accepting his money, but hadn't found any mention of the outstanding warrant [source: NPR].

Clinton's husband, former president Bill Clinton, pitched in to help his wife's fundraising efforts. He served as a high-profile surrogate at several events throughout 2007. At one dinner for 100 guests in New York in March 2007, Bill Clinton managed to generate $500,000. E-mails sent out by the campaign from President Clinton created $1 million in small donations [source: AP]. At another fundraiser that month, both Clintons appeared for the two-hour event, and raised more than $1 million from tickets that went for at least $1,000 [ABC News].

Clinton spent most of 2007 garnering donations from donors who gave the maximum $2,300 allowed by law and who fundraised for the senator. She largely avoided efforts to obtain small donations from individuals [source: National Review]. Her large-money contribution strategy worked for her campaign; in 2007, Clinton raised $115.7 million (her goal for the year was $75 million). By the end of May 2008, Clinton had raised $229.4 million for the entire campaign [source: Open Secrets].

Of the money she raised in 2007, where the gender of the donor could be determined, 50.2 percent of donors were men and 49.8 percent women [source: Open Secrets]. She found the most support from organizations representing retired Americans and workers in the legal, investment and real estate industries (more than $43 million combined), and the least from donors in the defense and labor industries ($400,000 and $282,000, respectively) [source: Open Secrets]. Twenty-two percent of her campaign contributions in the 2008 race came from the state of New York ($30.64 million); California provided the second most with $25.36 million (18 percent) [source: Open Secrets].

During 2008, Clinton's fundraising strategy of focusing on big donors stalled. "Most of our donors are maxed out," a Clinton fundraiser told Bloomberg News in February. The strategy shifted focus to a "broadening of the base" [source: Bloomberg]. Late in January, Clinton contributed a $5 million loan of her own money to her campaign [source: Wall Street Journal]. Her apparent willingness to show support for herself paid off, as in the five days following Super Tuesday 2008, Clinton generated $10 million in online donations from more than 100,000 donors. Her goal for the five days had been to raise $3 million [source: Hillary Clinton].

The following May, however, Clinton's finances were in need of another boost. She loaned her campaign an additional $6.4 million [source: Washington Post]. Just one month later, she withdrew from the race after her opponent, Barack Obama, snagged the requisite delegate votes to clinch the nomination. Clinton's campaign was left $25 million in debt, more than $11 million of that her own money [source: New York Times]. She found some help from her former rival: Obama appeared at fundraisers for Clinton and asked his supporters to donate to her post-withdrawal campaign to alleviate the debt [source: CNN].

It's difficult to blame Clinton for her willingness to contribute millions of her own dollars to her campaign. Despite a sag in the polls in the early spring of 2008, she was making as strong a showing in the primaries as she had any other time in the race. On the next page, read about Clinton's last stand and her role in the 2008 presidential race after her withdrawal.