John McCain and the Presidential Nomination 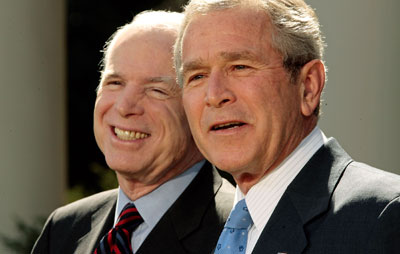 Sen. John McCain clinched the delegates needed early on in the primary race, compared to the long and often divisive race between the Democratic contenders. McCain made his first primary win in New Hampshire on Jan. 3, 2008; after that win, his fellow GOP contenders began dropping like flies. By March 4, McCain garnered the necessary 1,191 delegate votes needed to clinch the Republican nomination following four big primary wins [source: USA Today]. He became the presumptive 2008 presidential nominee for the Republican Party.

Democratic nominee Barack Obama didn't clinch his party's nomination until June 3. This gave McCain three full months to focus his campaign's attention on the Democrats and get an early start in the presidential race. After a primary season of both snubbing and sniping at McCain, Republican pundits and party members came together behind their nominee, albeit somewhat grudgingly. An August 2008 Fox News poll found that while 86 percent of Republicans surveyed planned to vote for McCain, only 17 percent "strongly" supported him as their candidate [source: Rove].

Sen. McCain was also forced to contend with the star quality granted by the media to Sen. Obama during the campaign. A poll taken during Obama's high-profile trip to Europe and the Middle East in July found that about seven in 10 Americans questioned said they believe "most in the media want Obama to win the November election" [source: Fox News]. McCain's disgust at being treated as a second-class candidate by the media during the campaign became so pronounced that during Obama's overseas trip, he issued special press passes to the reporters covering the McCain campaign. The badges facetiously boasted: "McCain Press Corps, JV Squad: 'Left behind to report in America'" [source: CBS News].

Despite the lack of attention paid him relative to Obama and tepid support from his party, McCain stayed competitive with his Democratic rival in poll after poll. Daily inquires by Gallup into the voting plans of at least 1,000 registered voters found that from March to August 2008, the widest margin between McCain and Obama was a 9 percent difference favoring Obama, with the average margin between the two much narrower [source: Gallup].

Like his Democratic counterpart, McCain drew criticism and controversy during the campaign. As an outspoken critic of the undue influence lobbyists have over the American political system, McCain was bashed after the New York Times reported in February 2008 on an improper relationship between the nominee and a female lobbyist. Many took the article as insinuating McCain had an affair with the lobbyist, although it was never stated explicitly [source: PBS]. McCain was also forced to clean house in his campaign in May. Five McCain aides, including the fundraising co-chairman for the campaign, resigned due to ties with lobbying groups [source: Washington Post].

The candidate was also criticized for some of his stated policy views. He received negative press after he responded to a question during a January 2008 town hall meeting in New Hampshire, telling the crowd he could see American troops remaining in Iraq for 100 years. Despite clarifying the following month that he meant maintaining a troop presence similar to those stationed in Korea or Japan, the remark continued to serve the Democrats as an easy criticism of McCain's foreign policy [source: ABC News].

He was also lambasted for what appeared to be "flip-flopping" concerning his policy on offshore drilling along the coasts of the U.S. McCain formerly supported a ban on drilling off the coasts along the Eastern seaboard, California and Florida. He reversed this in June, stating he would lift the ban if elected and leave the decision to drill to the states [source: CBS News]. McCain said offshore drilling could ease gas prices "within a matter of months," while others, including New Jersey governor John Corzine, publicly stated McCain's reversal would help oil companies more than consumers [source: CNN, Political Affairs].

Sen. McCain surprised the public and his party when he named a political unknown to share his campaign ticket. McCain chose Sarah Palin, the former mayor of Wasilla, Alaska, and first-term governor of that state. Palin, 44, is a former commercial fishing worker, a self-described "hockey mom" and avid outdoorswoman who enjoys hunting. She and her husband, Todd, had five children at the time of her nomination ranging in age from five months to 17 years.

McCain said he chose Palin because of her "grit and integrity and devotion to the common good that is exactly what we need in Washington today" [source: Fox News]. Palin's credentials included strong pro-life and family values and serving in an executive capacity as mayor and governor. She also brought controversy to McCain's campaign, however. Palin allegedly fired the state public safety commissioner serving under her after he refused to fire Palin's brother-in-law, a state trooper who was then in the midst of a divorce from Palin's sister. News later emerged that Palin's unmarried, 17-year-old daughter was pregnant. Palin and her husband released a statement saying they were proud of their daughter's decision to keep her child [source: CNN].

Palin's popularity made a swift contribution to McCain's campaign, bringing McCain even with Obama in the polls. But the GOP candidate's campaign took a hit in September. The U.S. economy slid into a recession, and many Americans concluded it was the result of poor management by a Republican government. With the Obama camp continuously linking McCain to the "failed policies of George W. Bush," and the economy continuing its slide, McCain's poll numbers slid as well. The campaigns entered October neck-to-neck, as they had been throughout the autumn. By the middle of the month, polls began to show Obama pulling ahead of McCain. One poll showed the Democratic nominee had a 49 to 43 percent lead over the GOP candidate [source: MSNBC]. Palin also made a series of gaffes in interviews that showed her lack of experience in national politics.

The debates are another reason political observers pointed to as reason for McCain's slide. Obama won all three presidential debates, according to CNN polls following each debate [source: CNN].

McCain ended up losing the 2008 presidential election to Barack Obama, 173 electoral votes to 365. Obama also decisively won the popular vote 52.9 percent to 45.7 percent. When asked about it in later years, McCain said, "After I lost ... I slept like a baby — sleep two hours, wake up and cry." In his memoir, "The Restless Wave," he wrote that he regretted picking Sarah Palin as his running mate and felt that he should have gone with his gut and picked independent Joe Lieberman instead [source: Collinson].