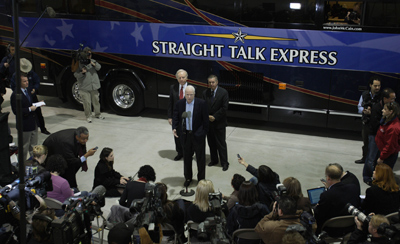 McCain stands before the Straight Talk Express in Phoenix in February 2008. He resurrected the nickname from his 2000 campaign.
Don Emmert/AFP/Getty Images

McCain first found his way to Washington as a Representative for Arizona in 1982. He served in the House from 1983 to 1987, when he ran for and was elected to the Senate. There, he began to make a name for himself as a Republican unwilling to toe the party line. McCain "has never hesitated to go against the grain of party wisdom on subjects ranging from immigration, global warming, gay marriage and campaign funding" [source: The Independent].

Going it alone served him well when he went after campaign finance reform. He and Wisconsin Democrat Sen. Russ Feingold worked jointly for seven years on the bill before the Bipartisan Campaign Reform Act was signed into law in 2002. "Campaign contributions from a single source that run to hundreds of thousands or even millions of dollars are not healthy for a democracy," McCain said the day the bill was passed by the Senate. "Is that not self-evident?" [source: Milwaukee Journal Sentinel].

Twelve years earlier, Sen. McCain found himself embroiled in a campaign finance scandal personally. During McCain's first year in the Senate, he and three Democratic senators intervened on behalf of savings and loan bank owner Charles Keating during an investigation by federal banking regulators. During Congressional hearings, it came to light that Keating had been a fundraiser for the four senators ($300,000 in total; $112,000 for McCain). The investigating committee exonerated McCain, finding him guilty only of "poor judgment" [source: Slate].

McCain generally enjoyed his state's perennial support. According to Republican polling expert Margaret Kenski, who worked for McCain, he generally got a favorable rating from about 60 percent of the voters in Arizona [source: Salon]. In the 2004 Senate election, he garnered 77 percent of his state's votes [source: PBS].

Sen. McCain made his first run for the White House in the 2000 campaign. He established the "Straight Talk Express," the official nickname for his campaign during the 2000 primaries [source: CNN]. He faltered during the 2000 race, however, when he failed to come up with the Republican Party's support and enough money to compete nationally [source: BBC]. He also lost the support of the Christian right when he referred to Christian leaders Pat Robertson and Jerry Falwell as "agents of intolerance" [source: International Herald Tribune]. Following his loss in the 2000 election, McCain returned to his seat in the Senate.

Between January 1987 and August 2018, McCain missed 1,220 of 10,383 roll call votes cast in the Senate (11.7 percent), earning him an "Exceedingly Poor" rating in comparison to his peers. The median for senators is usually 1.5 percent [source: GovTrack]. On the campaign trail for the 2008 primaries, McCain missed 401 of the 632 votes cast in the 110th Congress from January 2007 to August 2008. McCain missed the most votes of any senator in the 110th Congress, including 100 percent of votes cast in the third quarter of 2008 [source: Washington Post, GovTrack]. In the votes that he did cast, he agreed with Republican consensus 88.3 percent of the time [source: Washington Post].

McCain co-sponsored 1,227 bills between 1993 and 2008, earning him an "Average" rating relative to his peers in the Senate. He sponsored 537 bills during that same period, with 263 not making it out of committee ("Extremely Poor") and 31 becoming law ("Exceedingly Good") [source: GovTrack].