Voting Record of John McCain: National Security and the Economy 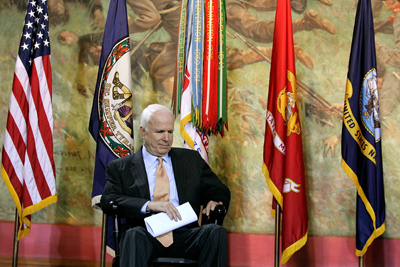 Sen. John McCain is announced at the Virginia Military Institute in 2007 before an address on Iraq War policy. McCain's support for the war hasn't wavered since the U.S. invaded in 2003.
Alex Wong/Getty Images

Beyond rhetoric, spin and messages, perhaps the truest means of establishing what a candidate values is his or her voting record. Here are some select important issues that came up for a vote during McCain's tenure in Congress.

Immigration and health care are two big issues in the 2008 campaign. Read on to see how Sen. McCain has voted on related bills in the past.