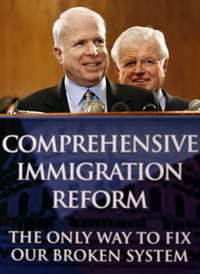 Keeping U.S. troops in Iraq until stability in that country is established was so much a part of John McCain's platform that one of his fundraising supporters told him; "'Everyone knows where you are on Iraq. Let's talk about the environment, pork barrel spending, health care, dependence on foreign oil,'" [source: The New York Times]. Still, the United States' military involvement in the Middle East remained an issue throughout the 2008 campaigns. Iraq's security improved, but a Taliban resurgence in Afghanistan gathered steam in 2008. McCain called for a U.S. military troop surge in Afghanistan like the one that had been successful in Iraq [source: McClatchy].

Despite America involved in two wars during the 2008 race, the economy took center stage in the campaigns. The subprime mortgage fallout spurred McCain to blame Wall Street, calling it "the villain" in the crisis [source: Jutia Group]. The senator's economic plan calls for making the Bush tax cuts permanent, while also offering tax breaks to the middle class and repealing the Alternative Minimum Tax. McCain's platform is big on competition and free-market economy: He calls for lower taxes on investment money and banning taxes on technology like the Internet and cell phone industries. He's also looking to curb Medicare spending and is in favor of saving Social Security.

As a senator, McCain spoke out in favor of a largely Democratic-supported bill to curb illegal immigration in part by establishing a path to citizenship for illegal aliens already in the United States. "But this effort must never entail giving away citizenship to those who have broken our laws," McCain wrote in an editorial in March 2007. "Rather it should require those who voluntarily come forward to undertake the hard work of reparation and assimilation that we expect." The candidate called for payment of fines and back taxes, as well as background checks and successful completion of English and civic exams as requisites for naturalization of illegal immigrants already in the country [source: Union Leader]. After coming under fire from conservatives in 2008, McCain acknowledged a shift in his views to support immigration reform only after the borders are secure. "People want the borders secured first," he said in June [source: CNN].

McCain's policy on health care leaned toward reducing costs over ensuring coverage. He "would allow drug imports from Canada to increase competition and drive down prices" [source: Go Health]. McCain has also called for tax credits of $2,500 to $5,000 for the uninsured to purchase coverage. He supported more competition among providers, as well as doctors receiving a set amount annually for services, with rewards for successful treatment [source: The New York Times].

Although some feel that in the past McCain's position on abortion was unclear, on the official site for his 2008 campaign, McCain took a clear stance on the abortion issue: "John McCain believes Roe v. Wade is a flawed decision that must be overturned" [source: John McCain]. The message continued that the decision to allow abortion should be left to the states.

He co-sponsored the partisan Climate Stewardship Act of 2007, which would establish a market for tradeable government-issued allowances for greenhouse gases, much like the current unregulated carbon trading model used by some companies in the United States [source: Library of Congress]. McCain was "the only [Republican candidate] who seems to recognize that there, in fact, is an environment" [source: EcoGeek]. "The fact is climate change is real," McCain said in August 2007 [source: Aspen Times]. To this end, McCain has remained an ardent supporter of the ban on oil exploration and drilling in the National Artic Wildlife Refuge.

Though his support for offshore oil drilling brought fire from Democrats, McCain's energy policy also includes weaning the U.S. off oil. In June 2008, his campaign captured headlines after the nominee said he'd offer a $300 million reward to any auto company that creates a car battery powerful enough to get the United States off of oil. He also committed a federal $5,000 tax credit for consumers who purchase a zero-emissions car, an enticement to both drivers and automakers [source: Reuters].