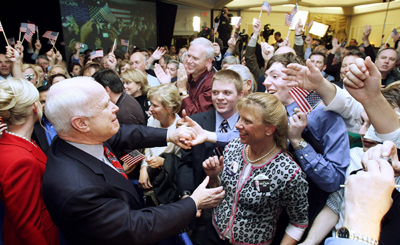 Following big wins in Iowa, New Hampshire (shown above), South Carolina and Florida during the primaries in 2008, McCain's presidential campaign was brought back from the edge of the abyss.
Mario Tama/Getty Images

Before the 2008 Iowa caucuses, Sen. John McCain was having enough trouble raising money for his campaign that some media outlets considered his campaign "seemingly dead" [source: Pollster].

In the first quarter of 2007, McCain raised $13.6 million, followed by $11.2 million in the second quarter [source: Reuters]. Donations dwindled toward the end of the year. In the last three months of 2007, he managed to raise less than $7 million [source: Federal Election Commission]. For a while, the campaign was in the red: In the last days of 2007, his campaign was actually $1.5 million in debt.

After a surprise second place showing in Iowa and a big win in the New Hampshire, South Carolina and Florida Republican primaries, however, McCain's finances found new life. From July to September 2007, McCain generated $5.7 million in contributions [source: AP]. Following those early primary wins, he was able to generate more than $7 million in one month, rather than three [source: Lawrence].

McCain raised contributions from 60,000 distinct contributors in the first three months of 2007, the first quarter of the presidential primary campaign [source: USA Today]. By the end of January 2008, he expanded his total number of donors to 110,000 [source: AP]. This seems especially important in the 2008 primaries, as a candidate is expected to require an estimated $500 million in campaign finances to be able to compete throughout the race [source: Open Secrets].

The vast majority -- 83 percent -- of the donations McCain accrued in 2007 and 2008 came from individual donors. Political action committees (PACs) made up 1 percent of McCain's financial contributions, just more than $1.2 million [source: Open Secrets].

Because of McCain's efforts in the Senate to eradicate influence by big business, campaign fundraising by the candidate is perhaps being watched especially closely. Washington Post writer John Solomon observed that to stay competitive in the primaries, McCain was forced to count on connected donors who had previously contributed to large groups McCain had fought against: "In early efforts to secure the support of the Republican establishment he has frequently bucked, McCain has embraced some of the same political-money figures, forces and tactics he pilloried during a 15-year crusade to reduce the influence of big donors, fundraisers and lobbyists in elections" [source: The Washington Post].

McCain's initial trouble with generating large campaign contributions could be attributed largely to three factors: McCain's crusade against big money influence over the political process, his outspoken criticism of groups that traditionally support Republican candidates (like military contractors) and his simple disdain of fundraising. "He is the Senate's most outspoken critic of military procurement policies, big Pentagon contracts and especially earmarks..." [source: The New York Times]. And the candidate "famously dislikes asking donors for money" [source: Financial Times].

McCain's campaign financing came under scrutiny in August 2008 after it came to light that a bundler -- contribution collector -- had accepted $50,000 from foreign donors. Under federal election laws, foreign citizens can't contribute money to campaigns [source: AP]. McCain's finances were also called into question when a $61,500 contribution to a joint McCain-Republican National Committee fund from a woman "of modest means" was found to be an office manager for Hess Oil Company. Companies funneling contributions to campaigns are illegal under election laws [source: AFP].

As the 2008 primary season wore on, McCain's campaign began to attract money that would have formerly gone to his competitors who dropped out of the race. "Rats are starting to leave multiple sinking ships," one McCain campaign fundraiser said in late January 2008 [source: Time]. With McCain as the sole contender for the GOP nomination, he began to raise far more money than before. By the end of July 2008, he raised $145 million during his entire campaign. More than half of that amount ($75 million) came in the first quarter of 2008 [source: OpenSecrets].

Indeed, the ships were sinking and by the end of February 2008, all in the GOP race except McCain's were sunk. In March, he won the delegate votes needed to become the presumptive Republican presidential nominee.