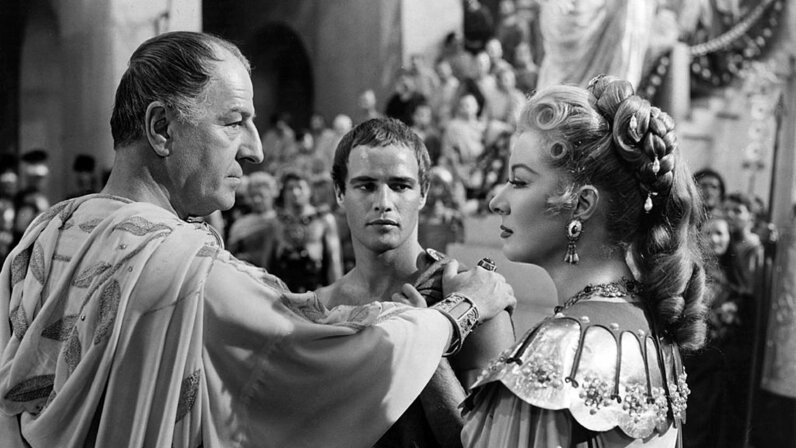 Julius Caesar (100 B.C.E.-44 B.C.E.) was a towering figure of ancient Rome, a populist politician and brilliant military strategist who overthrew a corrupt Roman republic and crowned himself dictator for life. His romantic exploits and bloody betrayal were juicy enough to fuel two different Shakespeare plays, and historians have wrestled over his legacy — savior, tyrant or tragic hero? — for more than 2,000 years.

And today most people still know his name, even though they're not sure why. Here are nine must-know facts about Caesar.

1. He Wasn't Born by C-Section

First, let's dispel the age-old rumor that Caesar was the original, or at least the most famous Caesarean baby. Philip Freeman, a classics professor at Pepperdine University and author of the biography "Julius Caesar," says it's extremely unlike that Caesar was surgically birthed millennia before anesthesia or antibiotics.

"In those days, a C-section was almost always a death sentence for a mother, but Caesar's mother lived 50 years after his birth," says Freeman in an email interview. "The story probably comes from Caesar's name in Latin, which looks very much like the word 'to cut.'"

And for the record, Caesar had nothing to do with the Caesar salad either. That was invented in 1924 by an Italian-born chef named Caesar Cardini working in Tijuana, Mexico.

2. He Was a Political 'Progressive'

"Conservative" and "progressive" are modern terms, but they're often applied to the partisan feud between Caesar's followers and those of his Roman political foe, Cato the Younger.

Richard Billows, a history professor at Columbia University and author of "Julius Caesar, The Colossus of Rome," says that Rome in the first century B.C.E. had become hopelessly corrupt, dominated by elite families called Optimates who doled out political favors for cash.

"Cato the Younger, the leading conservative, insisted that the traditional governing system ruled by the elites was absolutely fine as it was," says Billows. "The corruption problem wasn't institutional or systemic, argued Cato the Younger, but a moral one."

Caesar thought that was nonsense. The only way to root out corruption was to replace the incompetent elites with skilled governors and generals, some recruited from outside of Rome in its expanding foreign provinces.

Cicero, the great writer and orator, argued that the best way to keep corrupt officials in line was to install a rector of impeccable personal standing to act as a kind of supreme judge. Caesar liked the rector idea but wanted to take it a step further.

"Caesar believed that ending corruption was not something you could do by moral persuasion; you needed real power," says Billows. "The rector needed to have the power to depose and punish generals and governors who didn't behave themselves. In other words, Rome needed a dictator."

Caesar proved his political genius early, forming pacts with political rivals and getting elected as consul of Rome in 59 B.C.E. at 41 years old. But if he was going to make his case for becoming the sovereign ruler of Rome, he needed to show his strength as a military leader.

For centuries, Rome and its territories had been terrorized by invading tribes from the north. Rather than just fighting off these Germanic and Celtic hordes, Caesar decided to push north and conquer the whole of Gaul, which had roughly the same borders as modern France.

By Caesar's admittedly exaggerated account of his seven-year war in Gaul, his armies killed 1 million people, enslaved another 1 million, and subjugated the remaining 1 million.

"Not anywhere near a million were killed or enslaved, but it certainly illustrates that it was a pretty atrocious process," says Billows. "Caesar believed in the Roman Empire, and he clearly felt that it was necessary for Roman power to extend up through Gaul."

More importantly, says Billows, Caesar knew from experience that political fights in Rome were seldom settled by philosophical debate. Ultimately, if he wanted to defeat his political foes, he would need to use force.

"So, the conquest of Gaul, to a great part, is about the training of an army that he could rely on to take control of Rome," says Billows.

4. He Was Behind the Phrase 'Cross the Rubicon'

In modern parlance, "crossing the Rubicon" is making a decision or taking a step from which there is no turning back. In the year 49 B.C.E., Caesar marched his army out of Gaul and back toward Rome.

"The Rubicon River was the boundary between Caesar's province as governor and Italy proper, which no governor was allowed to enter with an army," says Freeman. "When he crossed the Rubicon with his troops, he was in open rebellion against Rome."

Writing a century later, the Roman historian Plutarch described Caesar's internal turmoil as he took "the dreadful step" and "thought of the sufferings which his crossing the river would bring upon mankind, as well as "the fame of the story of it which they would leave to posterity." Indeed Caesar's decision to cross the Rubicon thrust Rome into a bloody civil war in which Caesar defeated the much larger army of the Senate led by Pompey the Great.

5. He Eschewed the Title of 'King' for 'Dictator for Life'

"From that point on, Rome is governed by a monarch who oversees the whole system and determines who is going to govern where, who is going to lead which armies, where Rome goes to war and where it makes peace," says Billows. "It was an efficient, effective, centralized system where everything is answerable to one central authority figure."

Officially, Caesar's title was dictator, which literally means "the one who dictates" or gives orders. In Ancient Rome, dictators were special magistrates brought in to solve temporary emergencies. Today, the word "dictator" holds strong negative connotations, but in Caesar's time the title everyone avoided was "king."

"Romans grew up on stories on how the kings had become cruel and tyrannical, and that's why they had to be overthrown so Rome could become a republic," says Billows. "Caesar's enemies constantly accused him of trying to crown himself king, and Caesar always said, 'Rome will never be ruled by a king.' But what's in a word?"

In 45 B.C.E., Caesar declared himself "dictator for perpetuity." So much for the temporary gig.

When Caesar's adoptive heir Augustus became the first emperor of Rome, he went by the name Caesar Augustus, and all subsequent Roman emperors also carried the title Caesar, a sign of how venerated Caesar was as a military and political leader.

That respect/fear carried over into other cultures. The Russian word czar or tsar is a variant of Caesar, as is Kaiser in German.

7. That Fling With Cleopatra Was Mainly for Political Reasons

When Caesar and his army drove Pompey out of Rome in the civil war, Caesar chased Pompey's men all the way to Egypt. There, Caesar met Queen Cleopatra, with whom he had a secret love affair. For Cleopatra, half Caesar's age and hungry for political leverage, love likely had nothing to do with it. In fact contemporary accounts place more emphasis on Cleopatra's intellect and cunning rather than her supposed beauty.

"[Caesarion, the son she bore to Caesar] definitely gave Cleopatra status in the eyes of the Egyptians, but more importantly it bound Caesar to her," says Freeman. In fact, Cleopatra moved to Rome after their son was born and lived there until Caesar was assassinated. He even erected a statue to her, much to the dismay of the Romans.

8. Caesar Was a Terrific Writer

In addition to being a political genius and military leader, Caesar was also a prolific and accomplished writer. He wrote lengthy histories of his military conquests, penned his own speeches and even dabbled in poetry.

"I can't think of anyone else in history who has shown such extraordinary command of three different fields: politics, war and literature," says Billows.

The story goes that Caesar was such a wizard with words that he could dictate several different pieces of writing at the same time. He'd have three scribes in the same room, one taking dictation for an administrative letter, one writing up a speech to the Senate and another writing down Caesar's exploits in Gaul. Billows says Caesar would alternate seamlessly between each scribe like a chess master playing multiple games at once.

Caesar even published a joke book. They weren't his jokes, but he was a fan of humor, especially Cicero's. So, Caesar had a scribe follow Cicero around writing down his best zingers, which he assembled into a book.

Caesar also found time to reform the yearly calendar to the one we still use now.

The death of Julius Caesar in the Roman Senate, painted by Vincenzo Camuccini (1771-1844).
Leemage/Corbis via Getty Images

Although he had rabid support among the people, Caesar made more than his fair share of political enemies in the Roman Senate, including Marcus Junius Brutus, who had backed Pompey in the civil war. They felt that Caesar had amassed too much power.

On March 15, the infamous "Ides of March," Brutus and a cadre of conspirators murdered Caesar, stabbing him 23 times with double-edged daggers. They did it at a Senate meeting in full view of 200 witnesses, but the plotters were pardoned.

According to some sources, Caesar's last words weren't Shakespeare's famous "Et tu, Brute?" ("You, too, Brutus?") but "You, too, my child?" Either way, Caesar was shocked to see his friend among the people stabbing him.

After Caesar's death, his birth month of Quintilis was renamed in his honor as "Julius" – what we known in English as "July."

Now That's Interesting
The "Caesar haircut," unlike the salad, may owe its clipped-bangs look to Julius Caesar. Some Roman writers criticized him for being overly vain, especially about his thinning hairline, which he tried to cover up by combing his hair forward.