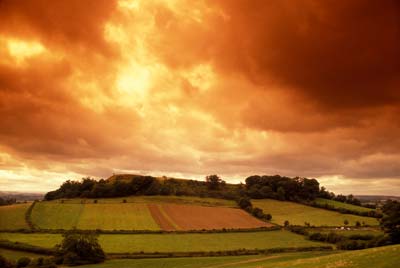 Sunrise over castle ruins in South Cadbury, England. This is one site said to be the location of Camelot.
Richard Nowitz/National Geographic/Getty Images

There are several questions to answer about the real King Arthur. Who was he? Where did he live? Although it's impossible to fully­ substantiate the mystical and Christian elements of the Arthurian legends, there are several names and locations that have been associated with King Arthur. Let's start with the places.

In the "Historia Regum Britannae," Geoffrey of Monmouth wrote that Arthur was born in Cornwall at Tintagel Castle. A stone was found at Tintagel in the late 1980s with an inscription containing the phrase "Artognou [descendant of Arthur], father of a descendant of Coll." Geoffrey of Monmouth names King Coel (Old King Cole of the nursery rhyme) as one of Arthur's ancestors. However, the castle was actually built in the early 1100s -- centuries after Arthur was supposed to have lived. Historians believe that Geoffrey inserted Tintagel into his narrative to please his patron, Robert, Earl of Gloucester (Robert's brother Reginald, Earl of Cornwall, lived at Tintagel).

The round table that hangs in Winchester Castle, once thought to be King Arthur's
Travel Ink/Gallo Images/Getty Images

So there's no substantiated birthplace for Arthur. But what about the fabled Camelot? Malory stated that Camelot was Winchester Castle. For hundreds of years, a wooden round tabletop has hung there. It's painted like a dartboard with the names of King Arthur and 24 knights to indicate their places at the table. However, Winchester Castle was actually built in the late 11th century. The round table was carbon-dated to around 1340 and was probably painted during the reign of Henry VIII in the early 1500s to coincide with medieval interest in chivalry. Caerleon in Wales and Cadbury Castle in Somerset have also been named as possible sites, but no definitive proof has been discovered.

­Geoffrey of Monmouth identifies Arthur's final resting place, Avalon, with Glastonbury. At one point, this town was an island surrounded by marshland. A large hill, or tor (Celtic for "conical hill"), rises from the plains. Glastonbury Tor is topped by the ruins of St. Michael's, an abbey built in the late 12th century. This abbey was built to replace a much older one that had been destroyed by fire. During the reconstruction, monks claimed to have found graves containing the bones of a man and a woman.

The grave was also said to hold a cross inscribed in Latin stating that the remains were of King Arthur and Guinevere. Neither the bones nor the cross exist today, but monks copied the inscription. Historians who have examined the inscription state that it's 12th century Latin, not a style that would've been used in the sixth century.

We may not have found Avalon, but what about the people of Arthurian legend?

In the United States, the word "Camelot" is also associated with John F. Kennedy's presidency. During a period of upheaval, the young and attractive Kennedy family and the president's words of inspiration brought a sense of hope to the American people. After his assassination, his wife Jackie Kennedy claimed that the couple listened to songs from the musical "Camelot" before bed, cementing the fairy tale aspect of the administration and romanticizing a history reputedly rife with affairs.