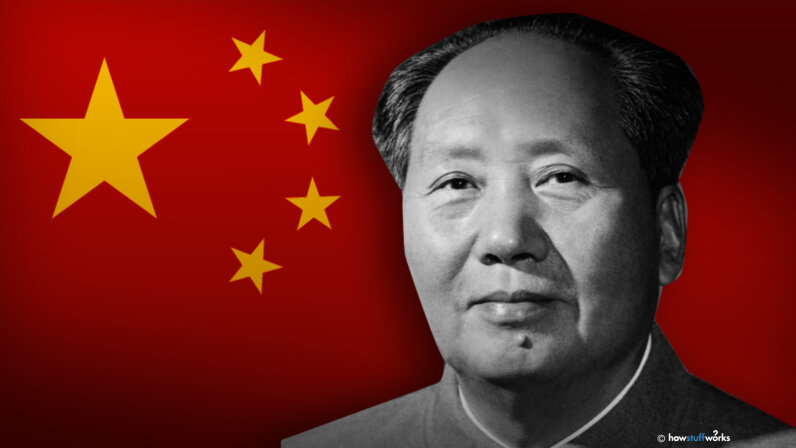 Mao Zedong, aka Chairman Mao, founded the People's Republic of China in 1949 and ruled the country with an iron fist until his death in 1976. ©Howstuffworks

Mao Zedong was an unflinching dictator responsible for the deaths of tens of millions of his people — and yet millions in China still flock to Beijing to visit his grave, and billions celebrate his birthday every year.

Mao was a visionary, a poet, a scholar and to some a demi-god who by virtue of his will and wisdom remade China from a poor country into one of the world's superpowers. Yet he is constantly grouped with 20th-century despots — madmen, murderers — like Joseph Stalin and Adolf Hitler.

Mao inspired the oppressed to take control of their oppressors. Yet he fought for most of his life to maintain his power, and the power of China's Communist Party, at any cost.

"Those who endured Mao's worst abuses execrate his memory," historian Jonathan Spence wrote in "Mao Zedong: A Life," a 2006 biography of the man who founded the People's Republic of China in 1949 and ruled the country until his death in 1976. "Those who benefited from his policies and his dreams still revere him, or at least remember the forces that he generated with a kind of astonished awe."

"The history in many people's minds is wiped out, not talked about, not mentioned. And the young people who don't know anything of that, they consider Mao as a national hero. The nationalistic appeal is so strong," says Xing (Lucy) Lu, Ph.D., Professor Emeritus at DePaul University in Chicago. She also wrote "The Rhetoric of Mao Zedong: Transforming China and Its People" in 2017. "They consider that a monument to Mao, because Mao stood up against the United States, the Soviet Union ... any superpower, he was not afraid of."

Mao was born in 1893 and, as a young man, was influenced by the revolution of 1911, which overthrew China's last imperial dynasty. He later became a founding member of the Communist Party of China (CPC) and its chairman. (He was, and still is, known worldwide as "Chairman Mao.")

He led battles within China and fought off the aggressions of the Japanese and, in 1949, outmaneuvered the National Government of the Republic of China in the country's civil war, forcing that faction to flee to Taiwan. In October 1949, he officially founded the People's Republic of China, then and now controlled by the CPC.

Mao was considered an intellectual by some, a poet, and a student of Chinese history and literature. He was a studied war tactician and a savvy politician steeped in the ideology of Marxism-Leninism.

A few years before modern China's formation, in a memorial speech to members of the CPC, Mao spoke of his party's most noble principle; to "serve the people." From his speech:

If we have shortcomings, we are not afraid to have them pointed out and criticized, because we serve the people ... If, in the interests of the people, we persist in doing what is right and correct what is wrong, our ranks will surely thrive.

The slogan still stands as a sort of communist party doctrine today. But history has shown that China, under Mao, could not sustain that promise.

After solidifying his grasp on power, and winning over the people by taking land from the wealthy and giving it to workers, Mao aimed to pull China forward into the 20th century with two notable plans. Both were disasters.

The Great Leap Forward aimed to use peasants in rural areas to jump-start an economic revolution through increased grain production. At the same time, the CPC urged peasants in newly formed communes and in city neighborhoods to take the first steps toward industrialization, forging steel through the building and use of backyard blast furnaces.

Many farmers moved into steel production, which didn't prove economically sound. And due to several other factors, grain production fell and was not nearly enough for a growing population. The result was a famine of unconscionable severity; the Great Leap Forward was responsible for tens of millions of Chinese deaths — maybe as many as 45 million — from the time it started in 1958 through the early 1960s. Several million of those numbers were executed for various crimes against the party.

"It is better to let half of the people die," Mao said during a secret meeting in Shanghai in March 1959, "so that the other half can eat their fill."

The failure of the Great Leap Forward enabled some other powerful people in the CPC to wrest control of some aspects of the government from Mao, at least for a short time. But in 1966, Mao launched another deadly program destined for failure.

The Great Proletarian Cultural Revolution, or simply the Cultural Revolution, was designed to shrug off the effects of the Great Leap Forward, rid the CPC and the country of those people who didn't agree with his vision, and move forward toward a stronger China. Mao had a simple plan: He called for rebellion against the party as a way of purging the elements that bucked his way of thinking.

Millions were driven from their homes, beaten, tortured or thrown into prison. Many millions were massacred across the country. Many thousands more committed suicide.

Armed students — the Red Guard — fought each other and killed others they deemed to be enemies of Mao and communism. They destroyed historic artifacts that symbolized the "old" China. Libraries were closed. Books were burned.

"Mao was above the law. In that sense, he was like a dictator," Lu says. "He was also seeking control of methods of controlling people's minds, brainwashing them through fear, through intimidation, through force. He [saw] himself as a savior of the nation and its people."

The Cultural Revolution threw the entire country into economic and social chaos. By its end, in 1969, at least 500,000 Chinese, maybe as many as 8 million, died in the uprising.

The Cultural Revolution and the Great Leap Forward, remain inerasable stains on Mao's rule. Tens of millions were murdered and starved to death in the name of communism.

Chinese paramilitary police officers salute each other as they stand guard below a massive portrait of Chairman Mao that still hangs in Tiananmen Square.
Kevin Frayer/Getty Images

After Mao's death in 1976, party leaders carefully pointed out "mistakes" that he made in the Great Leap Forward and the Cultural Revolution. Yet Mao — largely because of his part in the war against Japan and in China's civil war that established the People's Republic of China — is still revered by millions of Chinese, and even among party leadership.

In Tiananmen Square in Beijing, a huge portrait of Mao still looms. His "Little Red Book" — officially, "Quotations from Chairman Mao Tse-Tung" — remains required reading in schools. Songs are sung about him, poems written. Every year on his birthday (Dec. 26), thousands and thousands of people in his hometown eat noodles — a symbol of longevity in China — in a ritual celebration.

China is much different now, with an economy that borders on capitalism, investments from outside its borders, and a standing in the world that invites closer scrutiny and sometimes condemnation of its political and social structure.

Lu, born in the northeast part of the country, emigrated to the U.S. in 1987. She lived through the economic devastation that followed the Cultural Revolution. She remembers standing in line to get a pound of pork, her family's ration for a month.

Many idealistic Chinese, Lu says, long for simpler times, as they were under Mao.

"In private conversation, when people are complaining about corruption, about moral decline, they miss Mao," says Lu. "They think, 'I would rather go back to Mao's generation. We were poor, but people were kind to each other. Now, people only care about money.'

NOW THAT'S INTERESTING
The earlier spelling of Mao's name was a form of transliteration called Wade-Giles, which takes Chinese characters and converts them into classic Roman script based on the letters of the Latin alphabet. It comes out like this: Mao Tse-tung. You'll see that in many older books and research. The newer version, Mao Zedong, is now more widely accepted in English and comes from a transliteration known as Pinyin, which takes Mandarin Chinese and converts it into Roman script.