Browse the article 6 Famous Outlaws of the Wild, Wild West 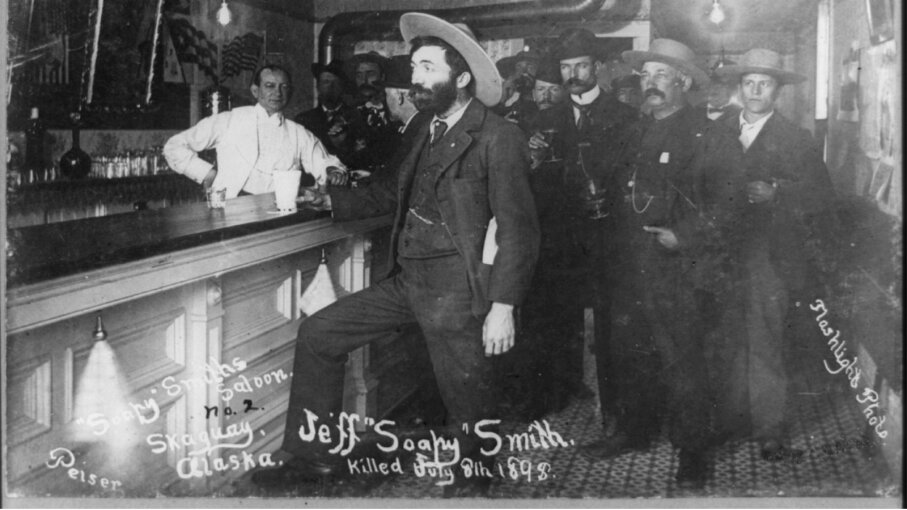 Outlaw con man Jeff "Soapy" Smith stands at a bar in the frontier town of Skagway, Alaska, where he would be killed in a shootout on July 8, 1898. Wikimedia Commons/Library of Congress

Jefferson "Soapy" Smith, so named because of his legendary “Prize Package Soap Sell” scam, was a well-known confidence man and swindler, a heavy drinker with a bad temper, a penchant for violence and an iron fist. After moving around the mining camps of the old West, surviving off a series of spectacularly successful swindles, he and his gang eventually moved into and took control of the frontier town of Skagway, Alaska. Soapy was killed in a shootout on July 8, 1898, before a meeting of the citizen group that had been organized to shut him down and run him out of town.

Yes, a violent end for a man who lived his life behind the barrel of a gun.

During their lifetimes, most of the worst outlaws of the Wild West were considered criminals and desperadoes, law breaking enemies of the state, every one. Today they are known as larger-than-life heroes with cooler-than-cool nicknames, the subjects of countless books, movies and outrageous tales, all chock full of blown-up details of their lives and criminal exploits. In popular folklore the stories of all famous outlaws pretty much share the same three qualities:

Folklore has its own truths, but we'll leave those alone to focus on what historians tell us. When we do that, the following commonalities emerge: thievery, guns, more guns, violence and early death.

Here are the stories of how six of the most famous outlaws of the wild, wild west — five men and one woman — lived and died. 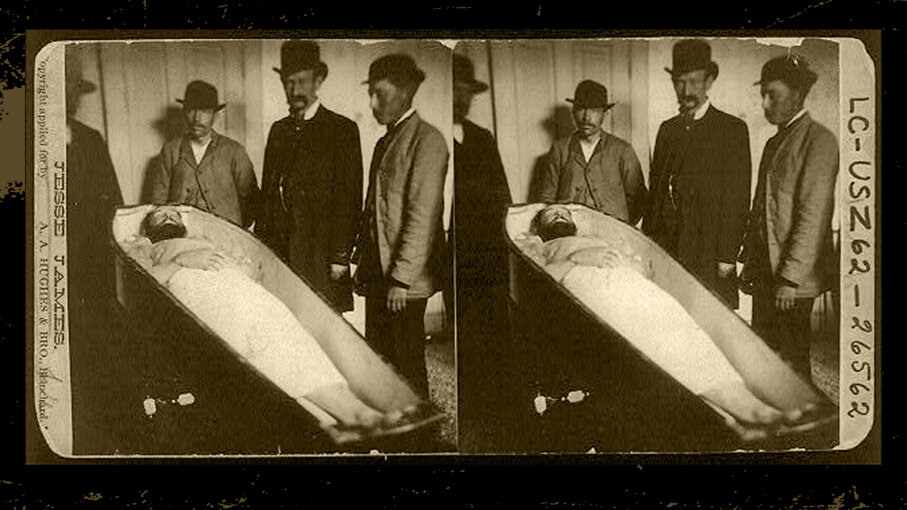 Jesse James lies dead in his coffin, cut down in the prime of life by his close friend, Robert Ford. Library of Congress

People like to believe that Jesse James was one of those compassionate thieves who stole from the rich and gave to the poor, but there's no evidence to support the claim. Born in 1847, James and his brother Frank came from a slave-holding farm family in Missouri and when the Civil War revved up, they joined the Confederate Army. They were just teenagers at the time, but they immediately found themselves riding with a death squad, which travelled from farm to farm slaughtering anybody with Unionist sympathies, many of them old neighbors. This apparently gave Jesse a taste for blood and chaos.

After the war, he carried on fighting, riding with a malignant mentor named Archie Clement who made a habit of robbing banks owned by triumphant Unionists. When Clement was ambushed and killed, James carried on the tradition, thieving and murdering with abandon. But eventually the old slave-holding class got the upper hand politically in the Southern states. When they did, Jesse was no longer their rebel ally, he was just a murderous thug who couldn't play by society's rules, even when society was on his side. In 1882, the new governor of Missouri, Thomas Crittenden, arranged a secret meeting with Robert and Charley Ford, Jesse's two remaining gang members. A short time later, while Jesse was dusting a picture in his living room, Robert shot him in the back of the head. It was an ignominious end to an ignoble career. 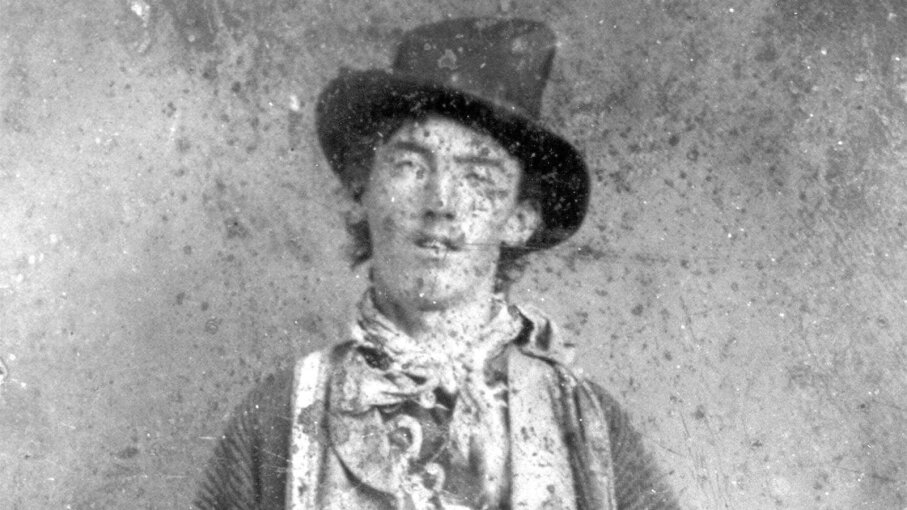 William Henry McCarty Jr., aka Billy the Kid, born in 1859, was killed in an ambush by Sheriff Pat Garrett in Fort Sumner, New Mexico, in 1881. Wikimedia Commons

Billy the Kid was the Arthur Rimbaud of Western outlaws. Sort of. For one thing, the two were near contemporaries. Rimbaud was born in 1854 and Billy in 1859. Still a teenager, Arthur Rimbaud outrageously broke the rules of literature to create a new kind of poetry that continues to influence culture today. Still a teenager, Billy the Kid flamboyantly broke the rule of law, making himself one of the most famous outlaws of the Wild West. Rimbaud abruptly stopped writing poetry when he was just 19. Billy abruptly stopped shooting when he was only 21 (or younger — nobody's sure exactly when he was born). End of comparison. Rimbaud went on to work as a trader in North Africa, dying at the ripe old age of 37. Billy the Kid's career ended at 21 because that's when he was shot dead by Sheriff Pat Garrett. Also, Rimbaud didn't have a cool nickname.

Billy the Kid started life as Henry McCarty and was later known as William H. Bonney. It's hard to believe that a person could acquire three different names in such a short time, but Billy packed a lot of living into a short life.

He was involved in a high-octane New Mexico dispute known as the Lincoln County War. During one clash, several men were killed and Billy got the blame, whether or not he actually did the killing. A posse soon captured him. But Billy was wily and managed a daring escape. After holing up in Fort Sumner, he was tracked down by Garrett who got the jump on him and shot him dead in a dark room on a dark night. 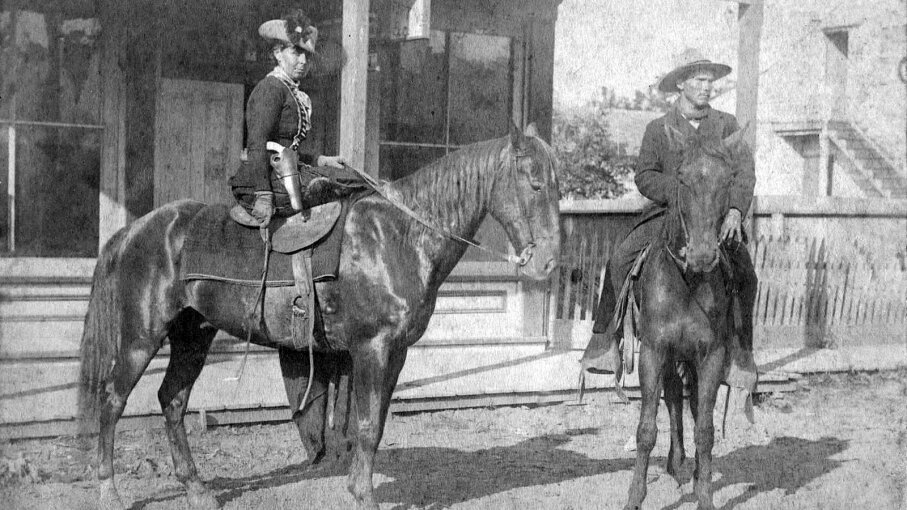 Belle Starr, sitting side saddle and sporting a pearl handled revolver, stares down one of the Roeder brothers, who were photographers in Fort Smith, Arkansas. On the horse beside her is Deputy U.S. Marshal Benjamin Tyner Hughes who, along with Deputy U.S. Marshal Charles Barnhill, arrested her in May of 1886 at Younger's Bend, Oklahoma, where she would later be murdered. Wikimedia Commons

Was Belle Starr really the "Queen of Outlaws," the "female Jesse James," the "Bandit Queen," "the Petticoat Terror of the Plains"? For more than 100 years, books and movies have stoked the legend of her outlaw life.

Myra Maybelle Shirley was born in Missouri in or around 1848. At the Carthage Female Academy, she mastered reading, spelling, grammar, arithmetic, deportment, Greek, Latin, Hebrew and piano. Her parents were wealthy and prominent denizens of Carthage, Missouri where they ran a hotel. But then the U.S. Civil War unleashed chaos. In its wake Maybelle moved to Dallas, Texas, where she wed a Confederate vet named Jim Reed, who made a career out of armed robbery. Together they had a daughter named Pearl and a boy named Eddie. The occupational hazards of Jim's work earned him an early death and Myra, who had re-dubbed herself Belle, eventually found refuge in Indian Territory (now Oklahoma) where she married a man named Sam Starr.

Belle and Sam were arrested twice for horse-thieving and Belle served time in Detroit. Later, after Sam and a lawman killed each other in a gunfight, Belle successfully proposed to Sam's adopted brother, Jim July Starr, who was 15 years her junior. Jim July was part Cherokee and together they farmed land in Oklahoma's Indian Territory. Belle was 41 in the winter of 1889, when she was blasted off her horse by a shotgun. Whoever pulled the trigger did so again at close range to make sure she was dead. Her murderer was never caught and nobody has ever learned why she died. 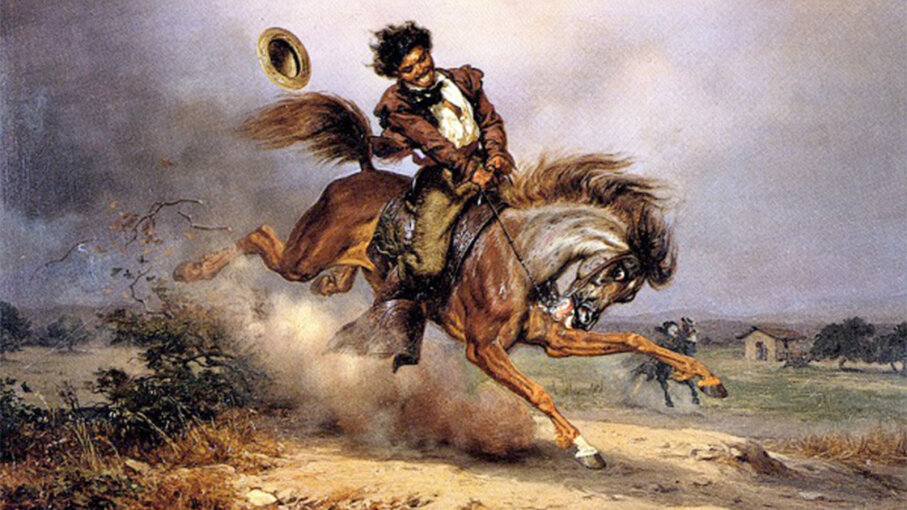 Joaquin Murieta is shown on his horse in an oil painting titled "The Vaquero" by Charles Christian Nahl, painted in 1875. Wikimedia Commons

Before there was Zorro, there was Murieta. Joaquin Murieta. The legend says that Murieta was a successful Mexican (or maybe Chilean) gold miner in 1850s California when jealous Anglos beat him, killed his brother and raped and killed his wife. Enraged, Murieta turned to crime, becoming a Mexican Robin Hood who held up trains and avenged racial injustice. It all came to a lurid end when California Rangers hunted him down, cut off his head and preserved it in a jar of brandy. Apparently, they felt they needed the body part to collect the $1,000 reward offered for eliminating the bandit. Many have disputed that the head really belonged to Murieta, but one way or another, the jar and its contents disappeared, possibly in the San Francisco earthquake of 1906.

This was the story popularized by Cherokee author, John Rollin Ridge in his book, "The Life and Adventures of Joaquin Murieta." And that story, in turn, ended up being one of the inspirations for the fictional character of Zorro. Nobody has been able to confirm Ridge's version of Murieta's backstory, but it does seem that he led a gang on a murderous crime spree in which they ruthlessly slaughtered dozens of people with no regard to their ethnic origins.

So where did the legend come from? Murieta's nephew, a fellow named Procopio, was only 12 when his uncle died. But he burnished Joaquin's story and made himself its heir as he grew up to be one of California's most infamous outlaws in his own right. 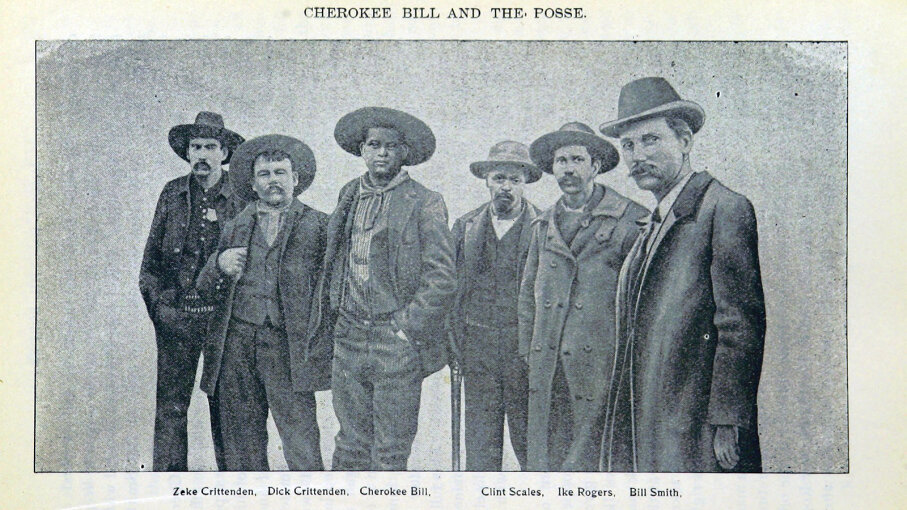 When Crawford Goldsby, better known as Cherokee Bill, was about to swing for his many crimes, these, allegedly, were his final words: "I came here to die, not to talk." That's some hard-bitten, old-school outlaw diction for you. Who knows if it's true, but it seems plausible given the man's general preference for shooting in lieu of dialogue.

He was born in 1876 at Fort Concho in Texas to Ellen Goldsby, a Cherokee woman with European and African-American ancestry, and Sergeant George Goldsby, a Buffalo Soldier of the famous 10th Cavalry. George and Ellen parted ways when Crawford was just 7 and he was sent off to schools for "Indians" in Kansas, and later Pennsylvania. It seems he failed to thrive in either institution.

Some say he killed his brother-in-law when he was 14, some when he was 12. Either way, his career began in earnest when he joined the outlaws Bill and Jim Cook at the age of 18. Then began a season of robbery and murder in Indian Territory that lasted from May through December of 1894 when he was captured. A violent prison break, during which he killed a guard, failed and in April of 1895 he was sentenced to die by the "Hanging Judge" Isaac Parker. On St. Patrick's Day of the following year he uttered his famous final words. 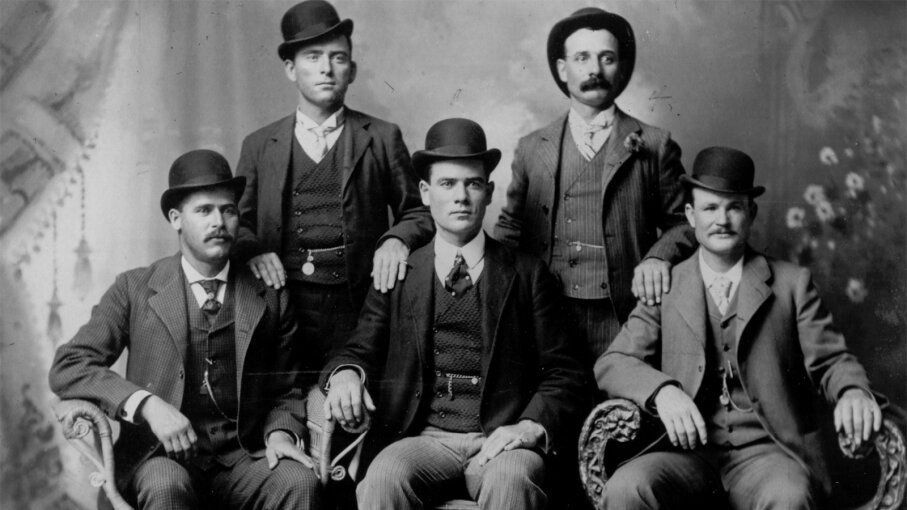 Butch Cassidy, seated far right, with his gang of outlaws, The Wild Bunch, circa 1900. Flickr/KurtClark(CC BY 2.0)

Just look at the guy — hat cocked to one side, neatly-trimmed mustache shading a smirk — he looks the very picture of a clever ne'er-do-well who enjoys pulling one over on the fools in charge. Maybe that's why so many people are prepared to believe he didn't actually die in a hail of bullets in South America, but faked his death, changed his name and lived out his life in Spokane, Washington. That's the story detailed in a book called, "Butch Cassidy's Story: Bandit Invincible," by William T. Phillips. Some even think the book is a memoir written by Cassidy under a pseudonym.

If that were the case, it would be one of several name changes for Butch, who started life as Robert Leroy Parker in 1866 but changed his name to Cassidy in 1889. He was the leader of a notorious gang called The Wild Bunch who roamed through Colorado, Wyoming, Montana, Idaho and South Dakota robbing trains and banks, stealing cattle and horses. When the law closed in, he fled to South America together with Harry Longabaugh (aka the Sundance Kid) and Harry's wife, Etta. There, the two men returned to the hard work of robbery and, according to reliable historians, met their end. Like most accounts of celebrity criminals who managed to cheat death, the story of Butch Cassidy's survival is based not in fact, but wishful thinking.