Who was Typhoid Mary?

Browse the article Who was Typhoid Mary? 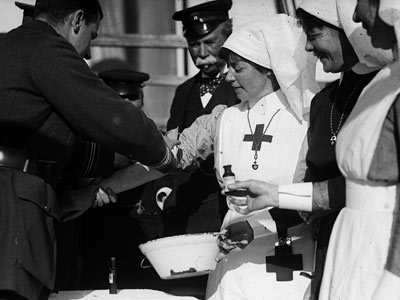 A nurse recieves a typhoid vaccination in 1915. Even if she's eating something Typhoid Mary serves up, she should be safe.
Topical Press Agency/Getty Images

Typhoid fever isn't­ a p­retty disease. Painful diarrhea, high fever, nasty red rashes and sleeplessness typically characterize the illness. Left untreated, typhoid can result in death. Salmonella typhi, the parasite that causes typhoid fever, spreads through water and food, making the disease highly contagious. Those who don't know the whole story are quick to blame one individual, known to history as Typhoid Mary, for intentionally spreading the deadly illness. As we'll see, the truth is a little more complicated.

In turn-of-the-century New York City, typhoid was a growing problem. The Department of Health had a lot on its plate; in addition to typhoid, it was trying to quell out­breaks of smallpox, tuberculosis, diphtheria and whooping cough that were sweeping through the area [source: NOVA]. Luckily, scientists had developed a sophisticated understanding of microbial diseases and how they spread -- even if everyone in the lay public didn't quite grasp all of it yet.

The Department of Health knew what caused typhoid, but dealing with the spread of the disease was another question altogether. It's a question that plagues us to this day. It's no longer considered humane to simply cast contagious disease victims out of society and into the wilderness to fend for themselves. What exactly to do with them remains controversial. Authorities must walk the line between keeping their societies safe from debilitating illness and infringing on the victims' personal rights. This controversy reached a fever pitch in early 20th-century New York when it came to one individual.

It might surprise you to learn that this fervor revolved around someone who was actually immune to typhoid. Though it's uncommon, some people are naturally immune to the illness, meaning they can carry the parasite and never suffer from a single symptom. Nevertheless, these people can just as easily spread the disease to others. This was the case for one Mary Mallon, aka Typhoid Mary. She was in the wrong place at the wrong time as well as in the worst possible occupation for a carrier of typhoid: She was a cook.

­Mary Mallon was born in Ireland in 1869. When she was a young teenager, she left for New York City, where she lived with her aunt and uncle until their death. Despite being alone in a large metropolis in a new country, Mary learned to make a good living as a servant in various households. By her 30s, she earned a position as cook, in which she served a dessert of ice cream and peaches that was to die for (quite literally, as we'll see).

When typhoid fever broke out in the upscale Oyster Bay community, one family brought in Dr. George A. Soper, an epidemiologist and sanitation engineer, to investigate what was going on. He was well-versed in the disease and aware of cases involving immune carriers. He asked the family for details about their eating habits as well as the staff who prepared their food. He investigated the possibilities that the illness transferred through oysters or that the sewage pipes could have tainted the drinking water.

When these proved dead ends, he focused on the kitchen staff. He finally pinpointed Mary as the likely culprit. After investigating her work history, he found that the families she worked for in the past had suffered from typhoid outbreaks as well. Had she used the bathroom without washing her hands and then prepared food for the family, she would've been able to spread the disease. Soper learned that most of the food she served was cooked (and thus probably safe from typhoid) but that her trademark ice cream and peaches dessert could have very likely infected the family. By this time, however, she was no longer working with the family that had hired Soper. And because she never left forwarding addresses when she left a household, it took some sleuthing to track her down.

When Soper did find her, the tough Irish cook was unwilling to cooperate. Soper tried explaining to Mary that she was infecting families with her cooking and that he needed to check her feces and urine for the disease. He may have explained the situation indelicately, however, because the story goes that before he could finish, Mary chased Soper from her kitchen with a carving fork.

Nevertheless, Soper was determined to test her for the illness, even if he had to drag her away kicking and screaming -- which was exactly what happened.

Doctors erroneously believed that removing the gallbladder could rid the body of the parasite that caused typhoid fever. When she was asked to go under the knife for the operation, Mary refused, thinking doctors were using this as a pretext to kill her off [source: NOVA].

Realizing that Mary wasn't going to give up easily, Soper went to New York's Departmen­t of Health with his evidence and quickly convinced officials to dispatch an inspector, an ambulance and a few policemen to bring her in. Again, she slipped through their fingers and fled through the house after she answered the door. After a three-hour search, they finally found her. As they dragged her away, as she fought tooth and nail -- a female inspector even had to sit on her for the trip over to the hospital [source: Gordon].

After testing her, it was confirmed that Mary did carry the parasite. The Department of Health offered her a deal: If she promised to give up cooking, they'd let her go. Mary obstinately refused to promise anything. So to protect the public, she was sent to North Brother Island to be quarantined in 1907.

In the meantime, the press latched on to the story and dubbed her "Typhoid Mary." While some people were outraged at what they perceived as a violation of Mary's civil liberties, the newspapers mostly painted her as a menace to society. One illustration depicted her breaking egg-sized skulls into a skillet.

After three years of detention, a new health commissioner came into office and released Mary under the condition that she never work again as a cook. A few years later, the Department of Health brought in Dr. Soper to investigate another typhoid outbreak, this time at New York City's Sloan Hospital. Soper discovered Mary herself among the kitchen staff there. Authorities took her back to the quarantine island, this time without a fight. She remained on the island until her death, 26 years later.

History isn't kind to Mary Mallon. One could argue that Mary heartlessly pursued her culinary career despite the knowledge that she was unleashing typhoid fever on others. However, some point out that the matter was more complicated. That she didn't show symptoms suggests that she might not have believed what the experts were telling her about her dissemination of the disease. It's hard to believe that she didn't see a connection in the outbreaks that followed her around. To this day, historians struggle to sketch her true character and motivations.

Although some say the number of Mary's "victims" is higher, historians have attributed about 51 cases of the fever to her, three of which resulted in death. Of course, those she did infect almost certainly went on to spread typhoid to more people.