Who Are the Real Caesar, Melba and General Tso?

by Karen Kirkpatrick Dec 16, 2016
Feel like a helping of that sweet-spicy dish named after a famous Chinese general? Paul Poplis/Getty Images

At the age of 98, Peng Chang-kuei recently died in Taiwan. While the name may not mean anything to you, he invented the classic American Chinese dish General Tso's chicken. No, General Tso did not create it, but it's a catchy name. Here's the story behind that chicken dish and four other foods.

General Tso Tsung-t'ang (sometimes spelled Zuo Zongtang) was a famous 19th-century military leader in China. No doubt he had many talents, but creating chicken dishes wasn't one of them. The dish came about in 1952 when Taiwanese chef Peng Chang-kuei stirred together fried bits of chicken, sauce and seasoning for a sweet-spicy taste sensation to serve to U.S. Navy Admiral Arthur Radford, who was visiting  his country. Radford reportedly loved the dish and asked for its name. Without missing a beat, Peng dubbed it General Tso's Chicken after the leader.

Peng moved to New York and opened a restaurant in 1973, which put the dish on the map. He later returned to Taiwan and opened a string of successful restaurants. Ironically, General Tso's chicken is not a favorite there as locals find it too sweet. "The original General Tso's chicken was Hunanese in taste and made without sugar," Peng said in an interview, "but when I began cooking for non-Hunanese people in the United States, I altered the recipe."

In the late 1890s and early 1900s, Australian opera singer Nellie Melba was the Beyoncé of her day, a superstar who performed at the great opera houses and theaters around the world.

Melba was singing in the Wagner opera "Lohengrin" at Covent Garden in London and staying at the Savoy Hotel. As the Savoy chef Auguste Escoffier told it, Melba gave him tickets to her performance, a production that featured a boat in the shape of a swan. The next night, back at the Savoy, Escoffier created a dessert just for Melba of fresh peaches over vanilla ice cream, and served it in a silver dish on top of a swan carved out of ice. (She must have been some soprano!) The dish was originally called Peach With a Swan, but a few years later Escoffier refined it with raspberry puree and re-christened it Peach Melba. (Incidentally, Escoffier also created Melba toast for the famous singer.)

Baby Ruth bars were created back in 1921 by the Curtiss Candy Co. in Chicago, and while lovers of the chocolate, caramel and peanut confections today may assume that the bar was named after baseball great Herman “Babe” Ruth, the story is a little murky.

This Baby Ruth ad from 1927 has a football theme.
Transcendental Graphics/Getty Images

At the time of its creation, Curtiss insisted the candy was named after former U.S. president Grover Cleveland's daughter Ruth. But Cleveland had been out of office since 1897 and a 12-year-old Ruth had died in 1904, while the baseball player was at the height of his popularity. Perhaps the company was trying to get out of paying royalties to Babe Ruth. To bolster his case, Curtiss said the lettering on the package was modeled after a medallion from the 1893 Chicago World's Columbian Exposition that featured the Cleveland family and the words “Baby Ruth.”

Fast-forward to 1995, and the company licensed Babe (not Baby) Ruth's image for use in advertising. Thus began a tie-in with baseball that included the Baby Ruth being marketed as “the official candy bar of Major League Baseball” from 2006-08.

New Orleans is a city synonymous with food and fabulous restaurants. At one such spot – Brennan's – the Banana's Foster was created. It was 1951. Owner Owen Brennan wanted to honor Richard Foster, his friend and the chair of the Metropolitan Crime Commission, an organization with the thankless job of trying to clean up the French Quarter, by naming a dessert after him.

Brennan's brother John led Brennan's Processed Potato Co. at the time and had a surplus, of all things, of bananas. It was a match made in heaven. Owen's sister, along with Brennan's chef Paul Blangé, created Banana's Foster, a concoction of bananas, sugar, rum and banana liqueur that's cooked tableside and set aflame before being served over ice cream.

Roman Emperor Julius Caesar, sadly, never got to enjoy this combo of lettuce, croutons, Parmesan cheese and a creamy dressing made using anchovies. It was created centuries later by chef Caesar Cardini at his restaurant in Tijuana, Mexico.

Like other origin stories, this one has gotten a little fuzzy over the years. Some say Cardini created the dish when he was running low on food one weekend and just threw some things together for one of his customers. Others say it was created by Cardini's business partner, Paul Maggiora, and called "aviator's salad" after it was made for American airmen stationed in nearby San Diego. (During Prohibition, many restaurants moved to Tijuana so they could serve alcohol.) A third version of the story says Caesar Cardini's brother Alex made it from a family recipe to serve to the airmen in the morning after a night of drinking. At any rate, the salad quickly grew in popularity and different versions are served at thousands of restaurants today. Cardini's Caesar salad dressing is also sold in grocery stores.

Now That’s Tasty
Need a drink to go with all of these dishes? Try the Bellini. The prosecco and white peach juice cocktail was created at Harry’s Bar in Venice in the 1940s and inspired by the soft pink color in one of Italian painter Giovanni Bellini’s paintings.

Monkeys Have the Anatomy for 'Human' Speech, But Not the Brains

Supersonic Travel Could Be Coming Back 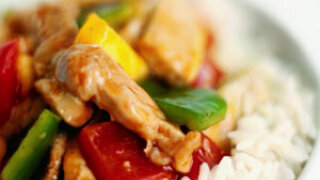 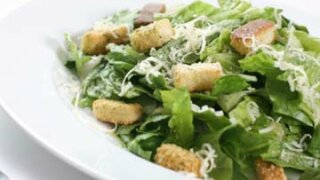