by Jane McGrath
Prev NEXT
6

Titus Oates and the Plot to Kill Charles II 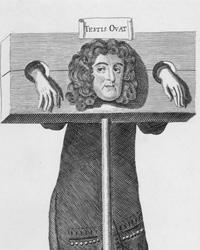 Titus Oates is depicted standing in the pillory after being convicted of purjury.
Archive Photos/Getty Images

By the time he fabricated his notorious plot, Titus Oates already had a history of deception and ­general knavery. He'd been expelled from some of England's finest schools as well as the navy. Oates was even convicted of perjury and escaped imprisonment. But his biggest lie was still ahead of him.

Raised Protestant by an Anabaptist preacher, Oates entered Cambridge as a young man to study for Anglican orders. After misconduct got him dismissed from his Anglican post, he started associating with Catholic circles and feigned conversion [source: Butler]. With the encouragement of fellow anti-Catholic Israel Tonge, Oates infiltrated enemy territory by entering a Catholic seminary. In fact, he entered two seminaries -- both of which expelled him. But it hardly mattered. By this time, he had gathered enough inside information and names to wreak enormous havoc.

In 1678, Oates concocted and pretended to uncover a plot in which the Jesuits were planning to murder King Charles II. The idea was that they wanted to replace Charles with his Catholic brother, James. What ensued was a three-year panic that fueled anti-Catholic sentiment and resulted in the executions of about 35 people [source: Encyclopaedia Britannica].

After Charles died in 1685, James became king and had Oates tried for perjury. Oates was convicted, pilloried and imprisoned. He only spent a few years in jail, however, as the Glorious Revolution swept through England in 1688. Without James in power, Oates got off with a pardon and a pension.