by Jane McGrath
Prev NEXT
10 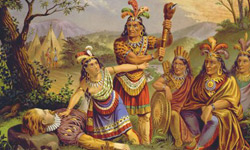 No on­e really complains when Disney waters down the grisly Grimm fairy tales with family-friendly overtones. But although Disney has a reputation for putting its own spin on those tales, the company fueled the ire of critics when it rewrote history.

This happened in 1995, when Disney released its own version of the Pocahontas story. In the Disney film, a romance emerges between Pocahontas, a member of the Powhatan tribe, and the British settler, John Smith. The story reaches its climax when Pocahontas throws herself on Smith to save his life.

Disney's brazen disregard for the truth immediately irked those familiar with the well-known story in U.S. history. Although it may be true, as Smith later said, that Pocahontas intervened to save his life, she was only 10 or 11 years old when she made the gesture — the film depicts them both as adults. The filmmakers completely fabricated the idea that love blossomed between them, and historians dismiss this idea out of hand.

Smith did, however, befriend the young girl, and she often visited the Jamestown settlement, sometimes bringing gifts and once saving the settlers from an ambush. She eventually did marry a British man, but it was John Rolfe, not Smith.

Were this film not directed toward children (who are less likely to know the real story), it could perhaps be dismissed as harmless historical fiction. But as it portrays real historical figures, critics complain that "Pocahontas" easily misleads children and interferes with the events they'll later learn about.