by Jane McGrath
Prev NEXT
9 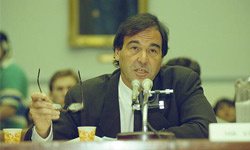 Conspiracy theories abound regarding the assassination of U.S. President John F. Kennedy. But controversy really ignited in 1991 when Oliver Stone released­ the film "JFK," which posits that one fringe theory surrounding the murder is fact and follows New Orleans district attorney Jim Garrison as he investigates it. The theory in question poses that many parties, including the military, FBI and CIA, were involved in a conspiracy to kill Kennedy (perhaps to stop him from pulling out of Vietnam). It even blames Lyndon Johnson for helping in the cover-up.

Of course, there are those who subscribe to this particular theory or others like it. But, if we're to trust the accepted beliefs of most historians, "JFK" is pure fiction. In addition to that, critics of Stone like Patricia Lambert argue that the filmmaker fabricated events that contradict known facts [source: Normey]. For instance, the movie depicts David Ferrie, one of Garrison's suspects, confessing to assisting in the conspiracy. In reality, argues Lambert, Ferrie adamantly denied involvement and offered to take a lie detector test to prove it. Errors of omission particularly incense critics, such as how Stone left out the fact that Garrison's key testimony was brought on by drugging and hypnosis.

The most scathing comments about "JFK" came from Gerald Ford and David Belin, two prominent members of the Warren Commission (the official body that concluded Lee Harvey Oswald was the lone gunman in the assassination). They declared that Stone's film was "a desecration to the memory of President Kennedy" and "a fraudulent misrepresentation of the truth to the American public" [source: Benoit].