by Jane McGrath
Prev NEXT
2

"Battle of the Bulge" 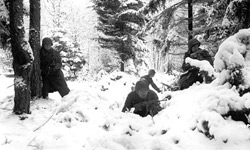 A photograph of the real Battle of the Bulge, complete with a very snowy Belgian forest.
AP Photo/U.S. Army

In W­orld War II, the Battle of the Bulge was a decisive encounter occurring in 1944 between the Allied troops and the Germans in the Ardennes Forest in Belgium. A triumphant Allied victory, it serves as great fodder for Hollywood.

The film titled "Battle of the Bulge" (1965) is set after the invasion of Normandy when the Allied forces have moved through France and into Belgium. Waiting for bad weather to ground the Allied air support, the Germans suddenly launch an offensive on unprepared troops. The Allies are losing and everything seems dismal until Lt. Col. Kiley realizes that the Germans are running out of gas. Using the gas that English-speaking German spies are hoarding, the Allies set the enemy's tanks ablaze when they come to collect their fuel supplies.

Although filming only 20 years after the actual battle, the filmmakers managed to forget a lot of important details. They shot what's supposed to be a bitterly cold Belgian winter in the temperate climate of Spain and made a half-hearted attempt to recreate the cold weather. The film also lacks the hilly and wooded terrain of the real battle. The Battle of the Bulge was primarily a tank battle, and historians find the tanks in the movie laughably inaccurate. In addition to being unlike the real Tiger and Sherman tanks used in battle, the newer Korean War-era tanks employed aren't even the appropriate color. And although fuel and resources were an issue in wearing down the Germans, historians claim the real scenario was very different from what was depicted in the ending of the movie [source: Niemi].

The movie incensed former U.S. President and Allied Commander Dwight D. Eisenhower so much that he emerged from retirement to state his disapproval in a press conference [source: Niemi].