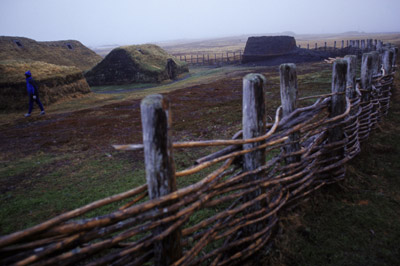 At L'Anse aux meadows in Newfoundland, Canada, a Viking settlement discovered there in 1961 has been reconstructed to its former state.
Courtesy David McLain/Aurora/Getty Images

From its introduction in 2003, Gavin Menzies' 1421 theory has come under assault. The writing that seeks to disprove Menzies is at least as long as his book. One question perhaps looms largest when approaching the 1421 theory: If the Chinese had a presence in the Americas prior to Christopher Columbus, then why isn't their mark left indelibly on the face of American civilization?

The Norse, who sailed as far west as Newfoundland in their travels across the Atlantic, left remnants of their visits to North America. Their folklore includes accounts of the Vikings' encounters with Native Americans. The crumbling remains of the stone outposts they built during their stay can still be seen. This was 1,000 years ago, and 500 years before Columbus' voyage. Yet the Vikings brief settlement in North America is still evident. If the Chinese had such a thorough impact on societies in the Americas just 70 years before Columbus' arrival, then why isn't evidence of their presence everywhere?

What's more, there's a distinct lack of cross-cultural pollination between the new world and China. When the Europeans arrived in the Americas, they brought with them things that have never before been seen in the continents, like steel and horses. But more importantly, they took back exotic treasures from the new world. Maize and tomatoes, along with vast amounts of plundered gold, found its way to Europe upon the ships of returning explorers. Where's the Incan gold or the corn of the Aztecs in China?