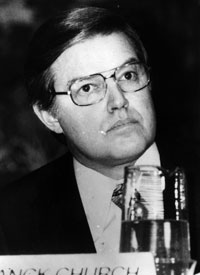 Sen. Frank Church of Idaho, the Congressman who opened the first CIA inquiry that led to the revelation of MKULTRA.
Central Press/Getty Images

In the 1950s, a CIA operative generally knew better than to accept a drink from another operative if he didn't have a spare 12 hours to break from perceived reality. Dr. Stanley Olson, a "perfectly normal" Army scientist, worked outside this informed circle [source: Ruwet]. So it was with common trust that Dr. Olson accepted a spiked drink from an operative at a joint Army-Agency conference. Olson didn't take the drug well.

Very quickly, Olson developed a bad trip (which he loudly shared) and experienced acute paranoia long after the effects of the LSD should have discontinued. He missed Thanksgiving dinner with his family out of fear of seeing them [source: Ruwet]. Eight days later, Olson was dead. He'd apparently committed suicide, falling from a 10th-story window in a New York hotel. In the 1990s, evidence emerged that he may have been struck over the head with a blunt object before plummeting from the window [source: Baker].

Barbara Newsome had a similar experience. Newsome was an acquaintance of George White's, married to a member of the operative's swinging social circle in New York. She hadn't been indoctrinated like her husband, though: When she attended one of White's parties without her husband, she brought her 20-month old daughter. White dosed her with LSD anyway.

Like Olson, Newsome had a bad trip. As was standard procedure for a George White acid test, she was turned loose onto the street after just a couple of hours, at the peak of her LSD trip. Newsome was ostensibly changed by the dosing, committed on and off for 20 years to a mental hospital [source: Valentine]. She never mentioned the experience to her husband, who only came to suspect what had happened after MKULTRA came to light years later.

The tests may have appeared overseas as well. In France in 1952, a young American artist named Stanley Glickman wandered the streets of Paris terrified after having met a group of American strangers in a bar. Glickman had accepted a drink from a clubfooted man (Gottlieb). After he consumed the drink, he became delusional and frightened, especially when one of the men told him he could probably perform miracles at that point. Glickman sequestered himself in his Paris apartment for several months, afraid to eat for fear of being poisoned. He eventually transformed into a strange, quiet fixture of a small neighborhood in New York [source: Baker].

On the record, MKULTRA was disbanded in the early 1970s, just another agency secret. Once it emerged, it confirmed any "paranoid" or "delusional" fears of just what the U.S. government is capable of when it believes it's threatened. The men involved escaped punishment. George White retired in 1965, opting for a life of terrorizing his neighbors in Stinson Beach, Calif., by driving his Jeep across their front lawns. Ike Feldman retired later, forced out of a later job at the DEA [source: Stratton]. Dr. Gottlieb retired to spend his remaining days volunteering with dying AIDS and cancer patients, working, he said, "on the side of the angels instead of the devils" [source: Budansky, et al].

There was one last footnote to the MKULTRA LSD subproject, one unintended and unforeseen side effect. Ken Kesey, author of "One Flew Over the Cuckoo's Nest," and arguably the founder of the hippie movement of the 1960s, was a willing participant in a separate, legitimate MKULTRA LSD experiment [source: Davenport-Hines]. Kesey brought his experience with acid to his friends, and by extension, whole generations of American youth were introduced to LSD.