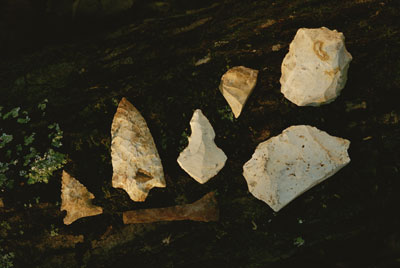 Although the Clovis-First theory provides a succinct and tidy explanation of human settlement in the Americas, it leaves questions unanswered. For example, why haven't Clovis artifacts been discovered along the passage they would have taken from Siberia to North America? Some evidence has been found in the northern United States and Canada. However, the time frame for these artifacts isn't definitive [source: University of Calgary].

And the Canadian evidence doesn't explain other evidence found in the Americas. The radiocarbon dating of archaeological sites suggests that the Clovis actually migrated south to north rather than north to south [source: Smith]. This implies that the Clovis would have come from South America, not from Siberia.

Clovis-First adherents discounted the idea of south-to-north migration until 1998, when the final report on a site in Monte Verde, Chile, was established as the oldest evidence of human habitation in the Americas. Monte Verde is located in the southwestern part of South America, not far from Antarctica. At the site, hearths and wood with knotted strings attached were found. The artifacts were dated about 12,500 years old, some 1,300 years before the Clovis showed up in the archaeological record of North America [source: New York Times].

Where did the Monte Verde people come from? Antarctica and South America haven't been connected for about 80 million years [source: Dutch]. How would anyone have traveled to the Americas? It's not entirely out of the question that boats conveyed early prehistoric American settlers.

Aboriginal Australians are believed to have lived on their island continent for as long as 60,000 years. And Australia broke free from Antarctica around 50 million years ago [source: Dutch]. The earliest Australians are believed to have migrated to the continent by boat, island-hopping in Polynesia along the way. It's possible a similar scenario explains the settlement of South America. This, however, is a speculative theory and isn't supported by any evidence found by archaeologists.

The Monte Verde site represented a polar shift in the way archaeologists look at human settlement in the Americas. Were these people the ancestors of the Clovis people? Did humans migrate northward, from South America up to the North American plains? Unfortunately, the Clovis didn't appear to leave a trail of evidence behind them. It's almost like they suddenly appeared out of nowhere in North America. There's no trail of artifacts showing the evolution of the Clovis projectile weapons in either a northerly or southerly direction. In the end, neither theory of where the Clovis came from is supported by their projectiles, the most telling artifact.

The Clovis remain a mystery, and the question of the earliest Americans' origins remains. Other fields of study are turning up even earlier dates for human settlement in the Americas. DNA evidence suggests that migration took place as early as 20,000 years ago [source: San Francisco Chronicle]. Linguistic examination of the roots of Native American languages support the idea that humans have been in North America for 12,000 to 50,000 years [source: Bernard, et al].

Perhaps the settlement of the Americas didn't take place by one group of intrepid travelers who gave rise to all other cultures. And it may not matter who made it to the Americas first. One researcher suggests the earliest settlement may have come in waves from different areas [source: Live Science]. It may be that a human presence in America couldn't have taken hold without all of these groups -- the contributions of each are ultimately more important than who came first.

For more information on migration and related topics, visit the next page.