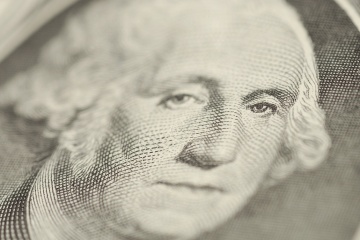 George Washington was ferocious and brave in many ways, but chances are he had really weak teeth.
Hemera Technologies/Thinkstock

Six-year-old George Washington had a shiny, new hatchet and couldn't wait to use it. He chopped a couple of small branches that had fallen to the ground near the family's stand of fruit trees and, feeling a surge of purpose, began hacking at a nearby cherry tree. Within a few minutes, little George's battle was over. He'd managed to chop down the tree, but as he wiped the sweat from his brow he realized the error of his ways. Not long after, he confessed that he'd cut down his father's favorite cherry tree.

Although this enduring example of George Washington's virtuosity is purely fictional, trees played a pivotal role in his life. After all, didn't he eventually wear a full set of wooden teeth?

Oft-repeated tales of the first president of the United States illustrate the dental troubles that plagued his adult life. At the tender age of 24, Washington was already paying to have his teeth removed and later diary entries recorded his battle with toothaches and other oral maladies. In fact, by the time he was inaugurated as the first president of the United States in 1789, he only had one working tooth.

Throughout his adult life, Washington relied on partial and full dentures. Unfortunately, none of them ever fit very well and caused his gums to swell. No matter how poorly they performed, there aren't any accounts of the dentures being carved out of wood. There were much more durable materials available like bone, ivory and human teeth.

Sometimes Washington used his own pulled teeth to help make up his dentures. He also purchased the teeth of African-Americans (a common practice at the time), which were held together with brass screws, lead and gold metal wire.

Despite all his dental woes, Washington didn't want anyone to know he had dentures. It wasn't too difficult to guess, though, because the ill-fitting dentures caused Washington's facial shape to undergo some remarkable changes. His upper and lower lips bulged out, and sometimes the spring-loaded dentures nearly escaped his mouth, which made speaking, eating and drinking a challenge [source: Fitzpatrick].

As Washington aged, his constant battle with troublesome dentures caused him to speak and smile less frequently, possibly leading to the stern countenance that we've all come to recognize today [source: Mount Vernon].

The Dare Stones: Forgery or Key to Lost Colony of Roanoke Mystery?
From Slave to Millionaire Philanthropist: The Biddy Mason Story
When Government Conspiracies Come True