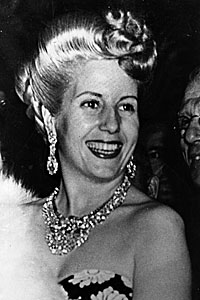 Eva Peron in Rome during her European tour.
Keystone/Getty Images

World War II had benefitted the Argentine coffers. Argentina emerged as one of the world's wealthiest countries due to its robust beef and wheat industries that exported to se­verely weakened countries, such as Great Britain [source: Barnes]. Capitalizing on the handicapped European economies, Argentina inflated its export prices, and the other countries had no choice but to pay up. But the Peron administration didn't take advantage of the healthy economy only to help the poor. It also financed a lavish lifestyle that included Eva's penchant for couture clothing and jewelry. In 1947, Eva set off without her husband for a publicity tour of Europe, including visits to meet fascist Gen. Francisco Franco in Spain and the Pope in Italy. During that "rainbow tour," as she referred to it, Evita from the pampas made her global debut.

Back home, Argentina under Juan Peron was anything but a democratic nation. Peron was heavily influenced by the fascist and nationalist political parties that dominated the Axis powers during the war. However, the dictatorship that he built -- with Eva's help -- didn't act as a vise grip, clamping down on people's daily lives. Citizens were allowed to do as they pleased, but the social and cultural establishments were tightly controlled. For instance, the government outlawed student political activism on campuses. Some opposition parties were dissolved, and anti-Peronists were silenced. The state controlled the major newspapers and radio stations, while closely monitoring the others.

Eva also manipulated this authoritarian rule for her own purposes. She ensured that enormous, smiling portraits of her face were plastered in prominent public spaces. On outings, a photographer rarely left her side, ready to capture the attractive first lady kissing babies or cutting ribbons. One of Eva's most successful ventures that won her even more recognition was the creation of the Eva Peron Foundation. Before that, the Sociedad de Beneficia was the leading charity in the country. But the upper-class women who ran the organization bristled at Eva's humble background and denied her the ceremonial director position. In response, Eva crippled the charity by eliminating its government funding and replacing it with her own foundation that financed the construction of schools, orphanages, hospitals and other social services.

By 1951, Eva's hectic pace drove her to the sickbed. After becoming first lady at 27, she had suffered from occasional fainting spells and stomach pains. But after doctors diagnosed her with uterine cancer, Eva's health quickly deteriorated. Her public appearances became scarce, and she became drastically thin and bedridden at barely 33 years of age.